To begin, I would like to discuss titles. My previous entries have begun "The Quick Brown Fox", and many of you may believe that to have simply been due to my desire to draw the connection between the famous key-testing phrase, and the Fox Typewriter. Quite truly, even though the two do make a nice connection, the "brown" was left in for another certain reason; The machine was quite truly brown. And not by design. Rather, just as with most of these antiquated machines, it was covered in a veneer of  tobacco residue. But Lo, after many an hour scrubbing and scrubbing and crying, that which was once Black turned Brown is now Black again. And in an impressive fashion, if I do say so myself: 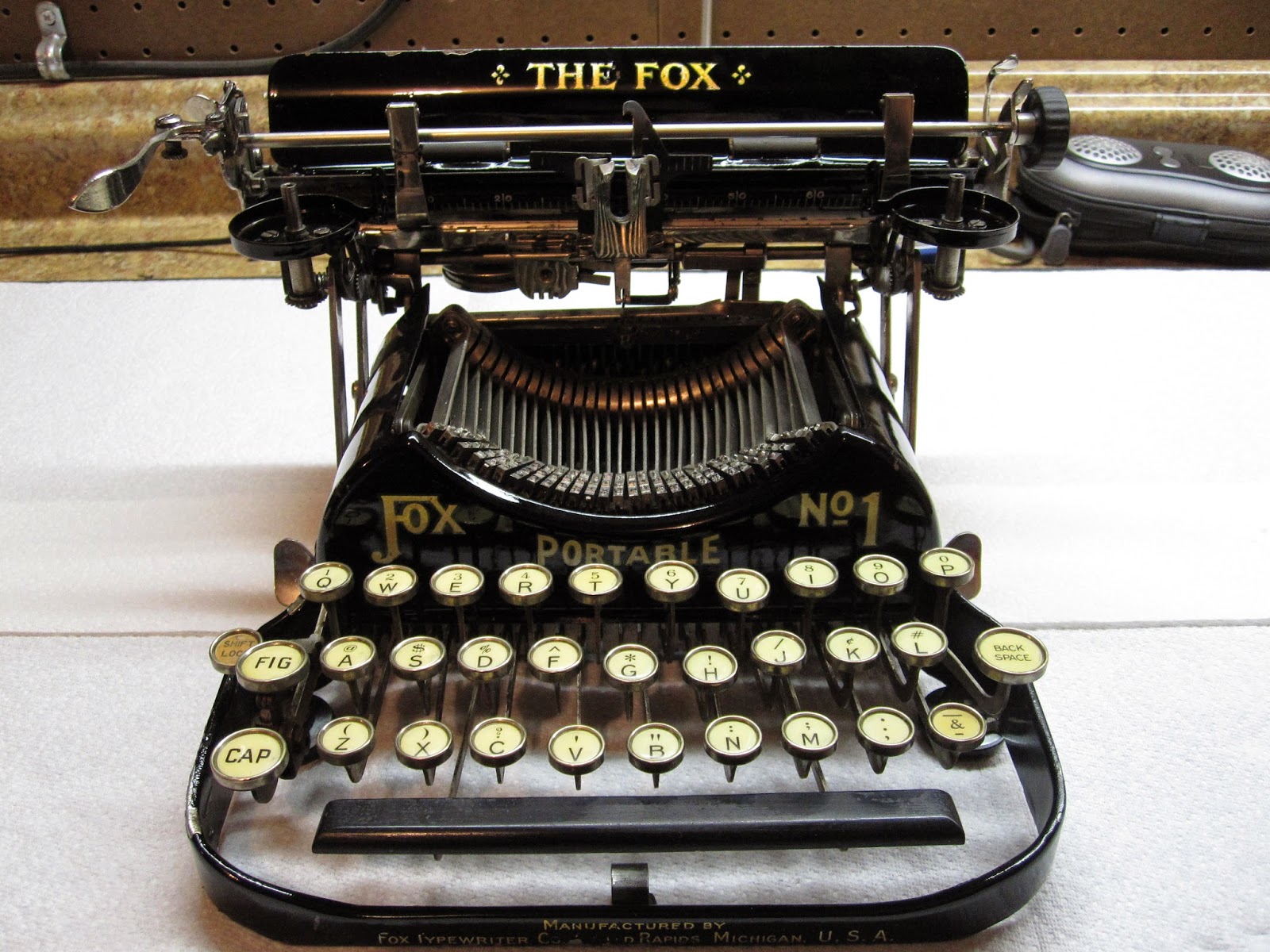 When I first acquired the machine, many of the nickel plated parts had appeared to have been worn down to the copper layer underneath, and I had almost lived with this fact (Was it what is considered "Patina"? Its the first time I've encountered it). But after vigorous scrubbing, the filth came off, and revealed perfect nickel plating still shining brightly. I may or may not have jumped for joy. 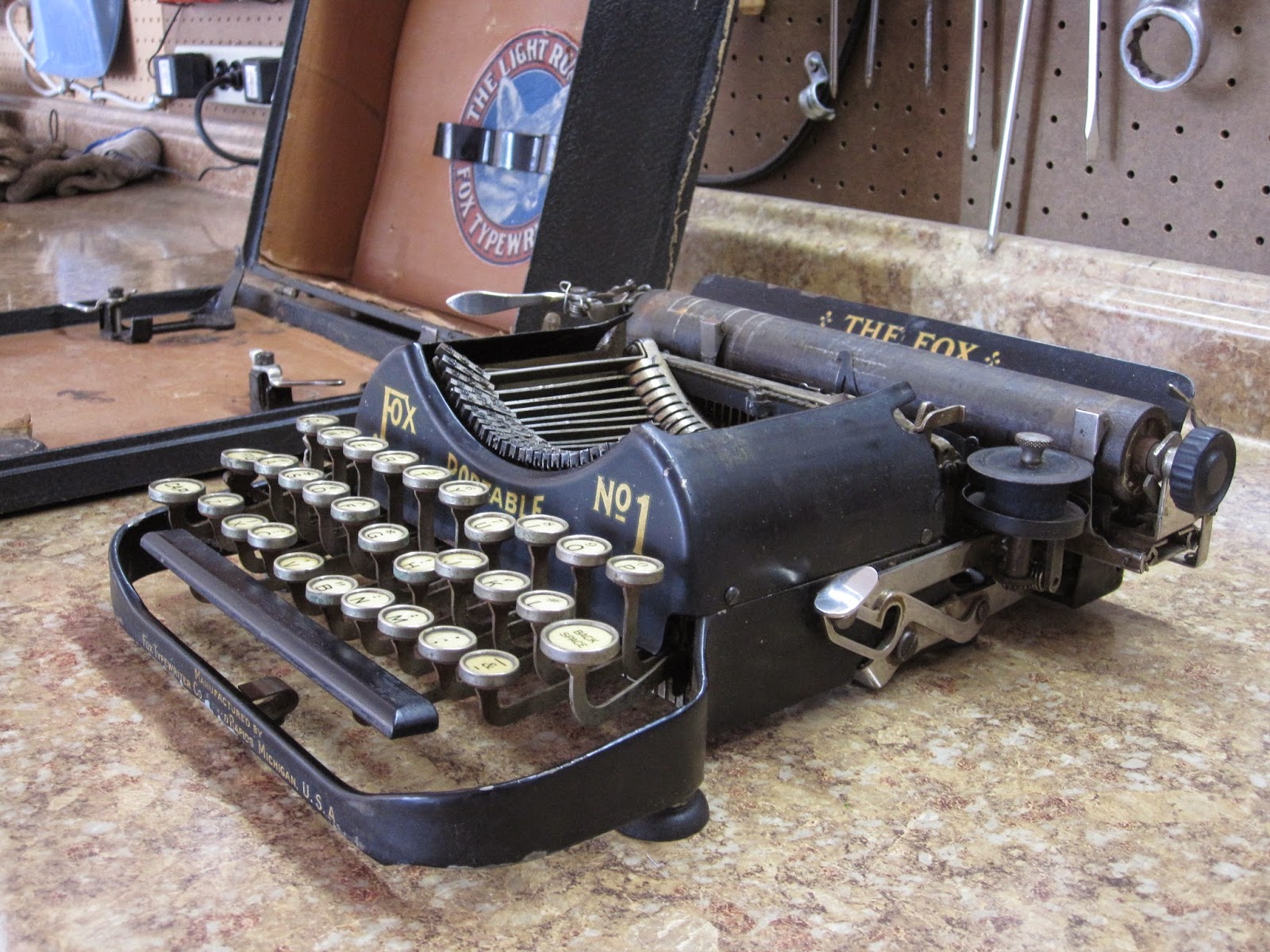 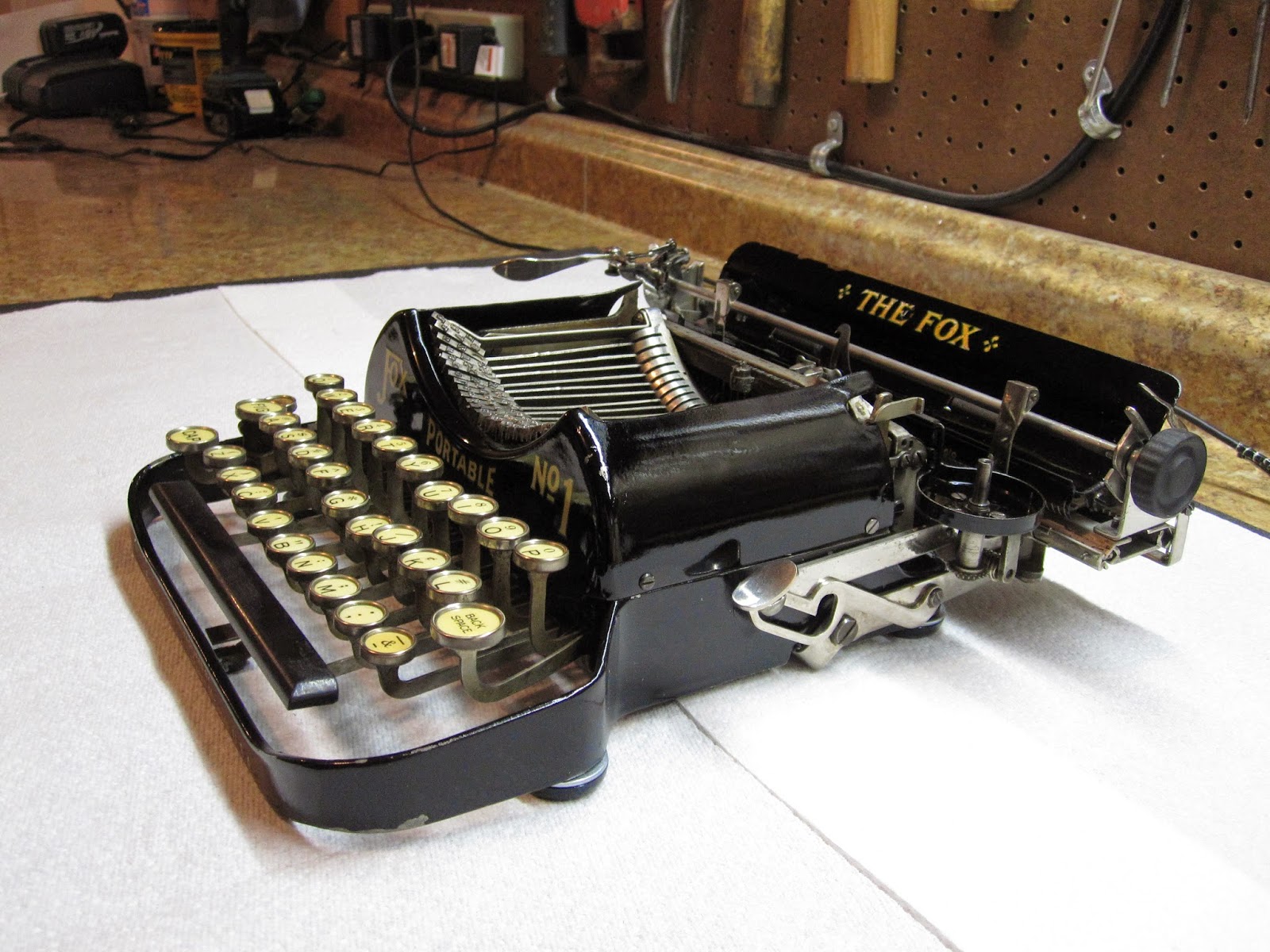 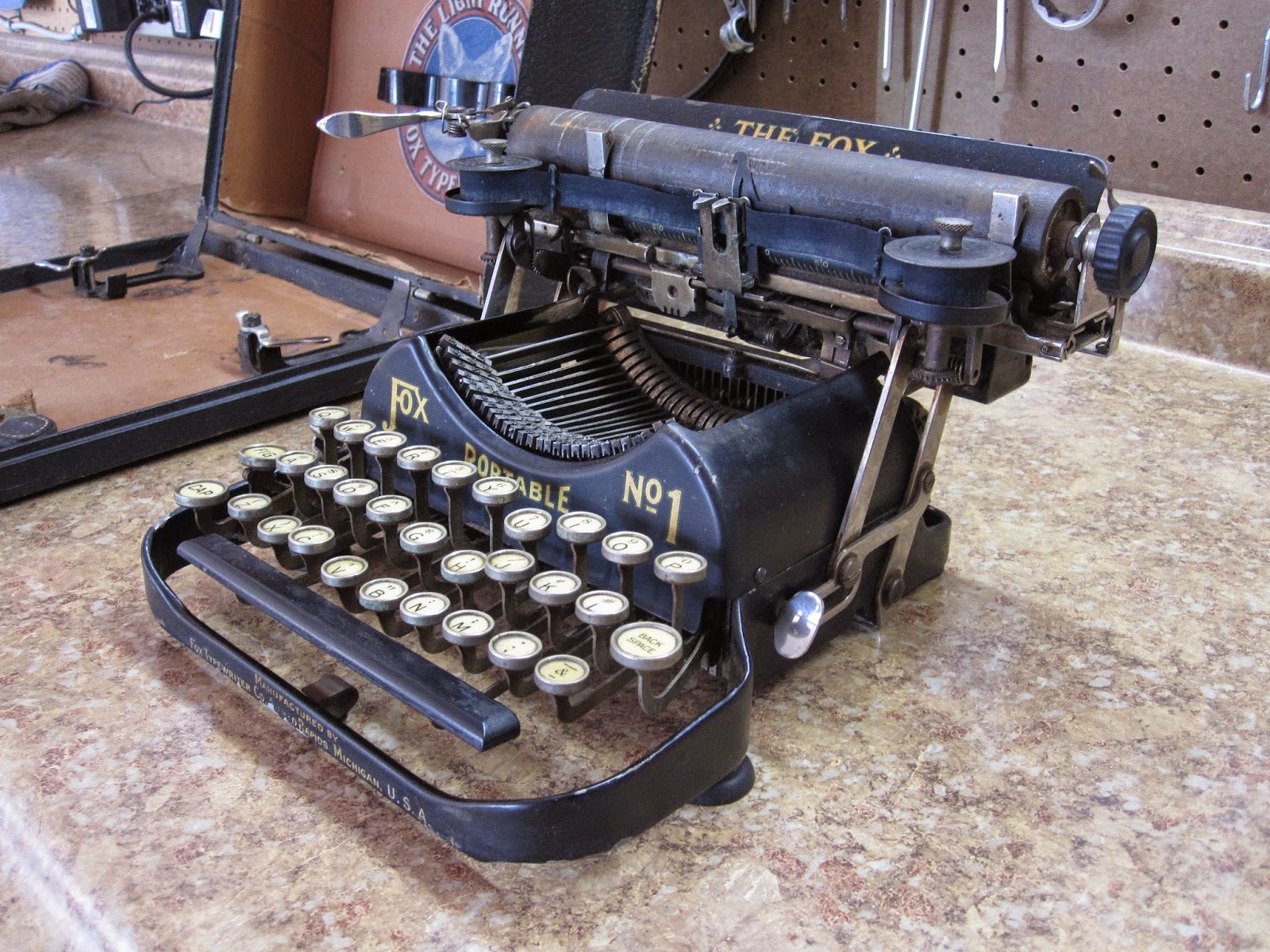 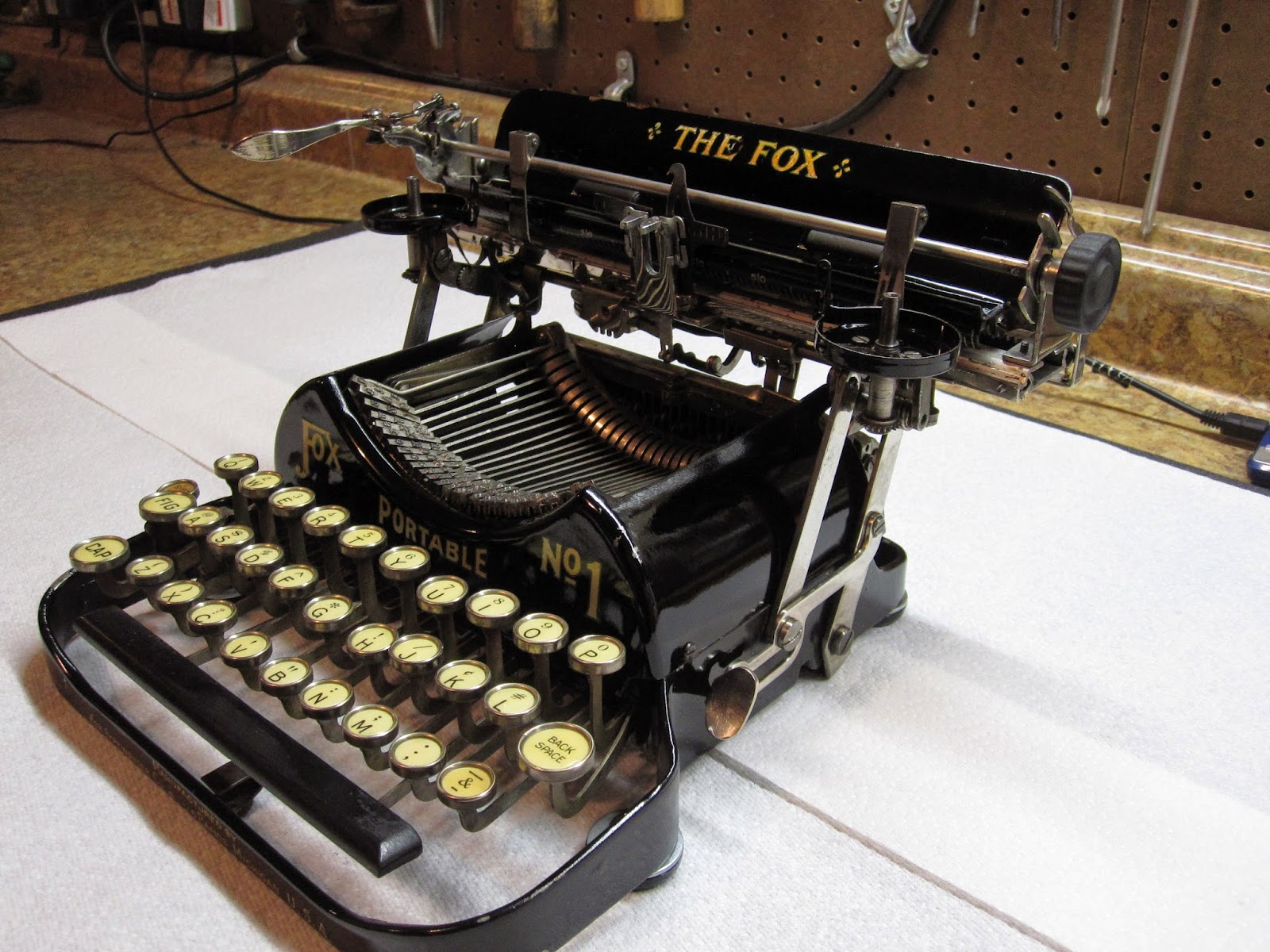 Although the issue of whether one should or should not take apart a machine depends wholly upon the circumstances and condition of the machine, and the ideology of the person making the decision, I find that choosing to do so allows me to thoroughly clean a machine to an appeasing degree. 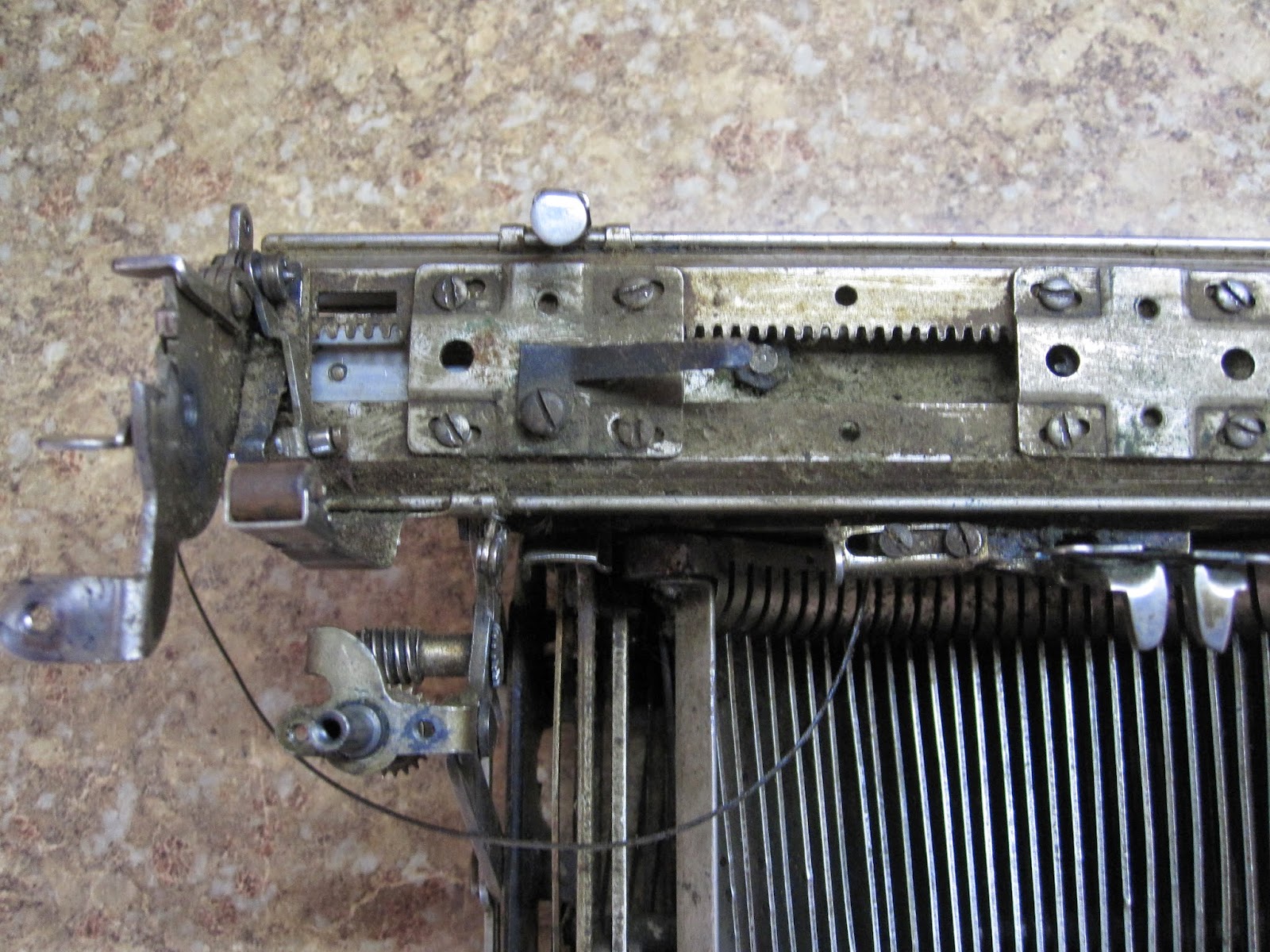 The dirt and debris was not visible until the platen and paper-bail plate was removed, again reassuring me of my actions. There were dead bugs under the carriage as well, leading me to believe that this machine had either been stored in a barn for twenty years, or some similar such location such as an attic or basement. (I would bet a whole $10 that there's a Sholes and Glidden shoved behind a steamer trunk in someones attic somewhere.)

I do believe that upon installing the newly recovered platen in the near future, this will quite truly become my favorite machine, though I will be deathly afraid to take it anywhere.

Special thanks once more to Mr. Richard Polt and Mr. Robert Messenger for their help in understanding certain functions of the machine.

Greetings again to thee, Typospherians. In a follow up to my previous post, I now have the answers to my 3 questions, and they are as follows:

1) How does the bell-system work? Due directly to the help of Mr. Robert Messenger and Mr. Richard Polt, I now have sufficient examples to properly fix my machine. Said examples can be found here, http://oztypewriter.blogspot.com/2014/07/anatomy-of-fox-no-1-portable-typewriter.html, in what is quite clearly now the most in-depth dive into the workings of the Fox Portable to currently grace the internet.

2) How does the ribbon change direction? Mr. Richard Polt provides the answer: "Try loosening the nut on whichever spool is being unspooled. When you reach the end of the ribbon, tighten it and loosen the other one. Crude, yes, but a common system on early portables."

3)Where in blazes is the serial number? The serial number is found to the left of the key-basket, on the frame of the inner machine. My Fox Portable No. 1 is #319.

Once again, a special Thank You to Mr. Richard Polt and Mr. Robert Messenger, without whom I would most certainly still be staring endlessly at my machine, a silent tear of hopelessness running down my face.

Stay tuned later this week for an update on the restoration of the Fox Portable No. 1
Posted by Words are Winged at 9:43 PM 2 comments:

Greetings to thee, Typospherians. Today, I ask for your help in dealing with my Fox Portable Typewriter.
In working upon it, I have uncovered questions and mysteries which, for some lucky others, have already been solved. To begin, I would ask of you:

1) How does the Bell-ringing system work? On my machine, upon receiving it, the wire holding the weight which strikes the bell was snapped off from where it should have been, and the wire used as a spring was out of place. I have need of the knowledge of how these pieces are supposed to be put back onto the machine, as for the life of me I cannot figure it out. This is my most serious issue.

2) Explanation for the Ribbon movement. In looking at how the machine operates, both spool mechanisms appear to be rotated at the same time in opposite directions. Assuming this machine was not, in fact, designed to be useless, how does this allow the ribbon to not simply be torn asunder?

3) Where in the blazes is the serial number? It was difficult enough to find the S.N. on my Fox 25, but I've yet to stumble upon it on the portable despite taking a decent amount of the machine apart. It must either be caked in dust to such an extent that i am unable to recognize its existence, or Fox stopped caring about putting S.N. on their machines as they went bankrupt.

I eagerly await any aide which may be granted.