Blinded By The Reflected Light: A National No. 5

It's never the machines you're actively looking for that you get lucky with. I've yet to find the illusive Fox portable serial number 001, after all. But, just like I accidentally stumbled into possession of a Blickensderfer 9, I accidentally found this National No. 5 just about 3 minutes after it was posted to that notorious bidding site we all know.

It's hard to properly create a "most-wanted" list, but one of these in full nickel plating was certainly high up there for me. And aside from needing a good restoration, its only missing a platen knob and its case (as far as I can tell anyway).

I've long since learned that the machines I appreciate the most are often the ones that require my services the most. When all I have to do is lightly blow on a machine and its good to go, I don't get invested into it. I don't understand it. And I certainly don't have any attachment to it. But those machines that I take apart down to the last screw, and rebuild, are the ones I genuinely desire to keep. Because I've dedicated myself to it. Learned how every function works. What quirks it has, how well engineered it was. I learn it as a brother.

Enough babbling on though, here is the newest find which I am quite excited about; 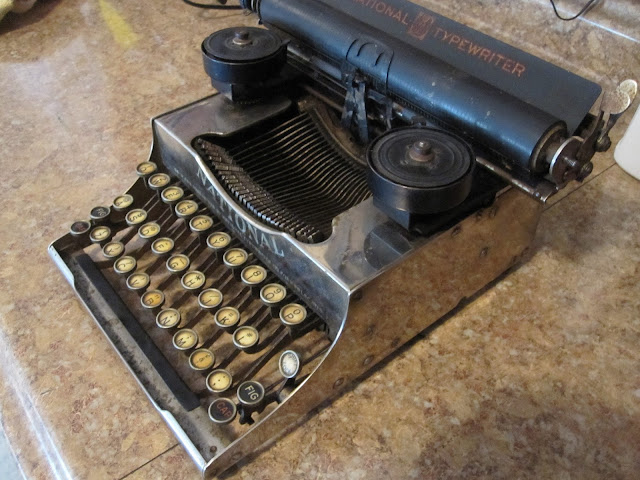 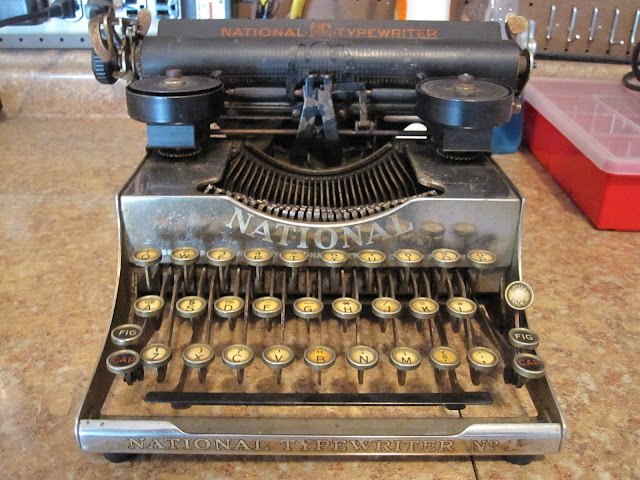 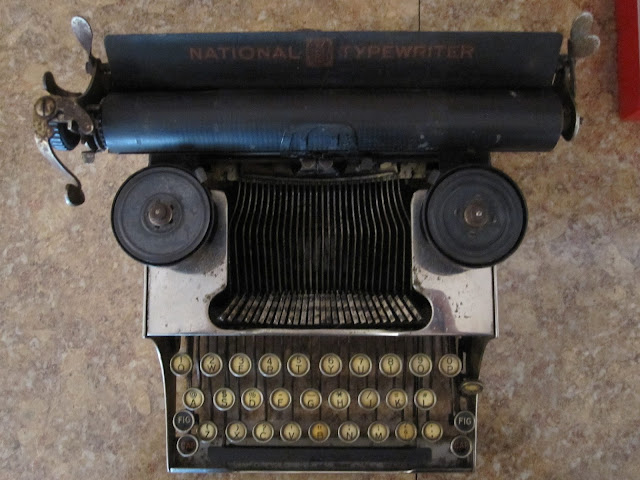 It's beautiful. Pitted, of course, but thats fine. Its around a century old, and hasnt had a case for probably decades. I used some steel wool on the right side on the top of the front frame, and its already looking promising (you can see in the picture just above). I'll be grabbing some Mother's Mag and Aluminum Polish to get this puppy to shine in the end.

But, if you know me, you know that no machine is safe. Once it was unpacked, I began my customary exploration and associated dissassembly. The front plate was held in by 4 screws, two on each side, and the back plate had 4 as well; 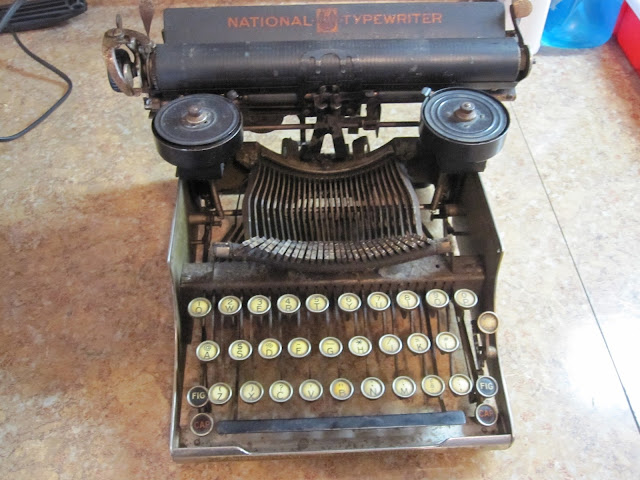 I already knew it was going to be a simple machine, but by golly is this wonderfully simple. 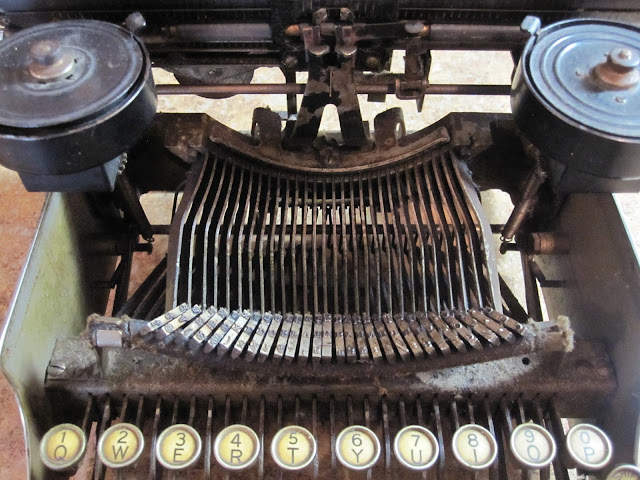 I have to imagine a repairman would have appreciated the instant, easy access to the mechanism. The actual escapement pivot isn't in the machine (having fallen out previously, and placed in a baggy by the outstanding seller), but otherwise this is it. The bell resides on the back plate. 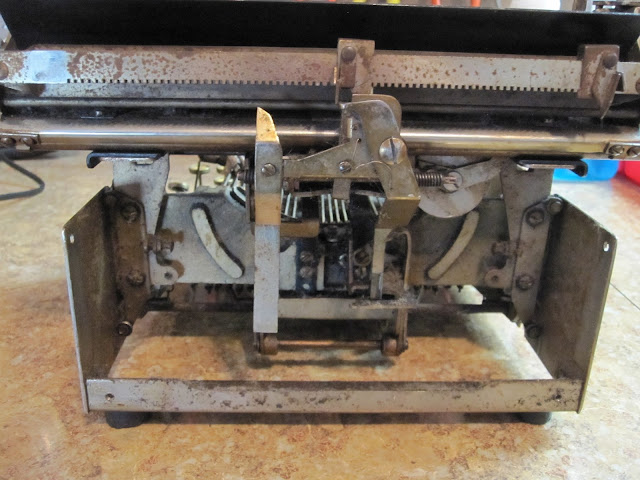 It took a few seconds of careful study to realize the carriage is held on by only 6 screws, 3 on each side. I had but one thing to do upon realizing such; 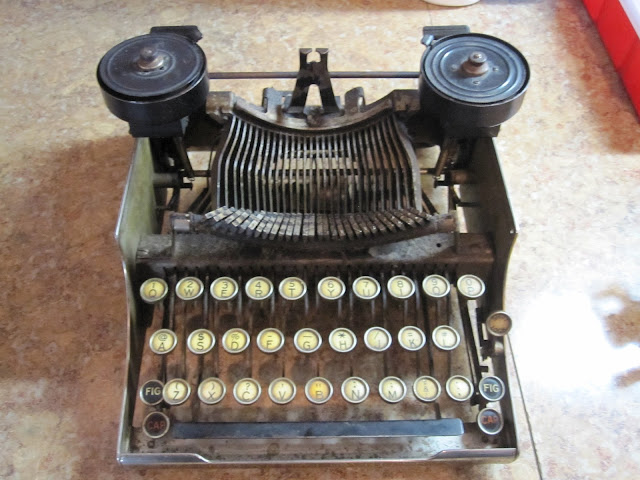 I went ahead and took the tension off the motor, since I plan to dissassemble the whole carriage for cleaning at some point. 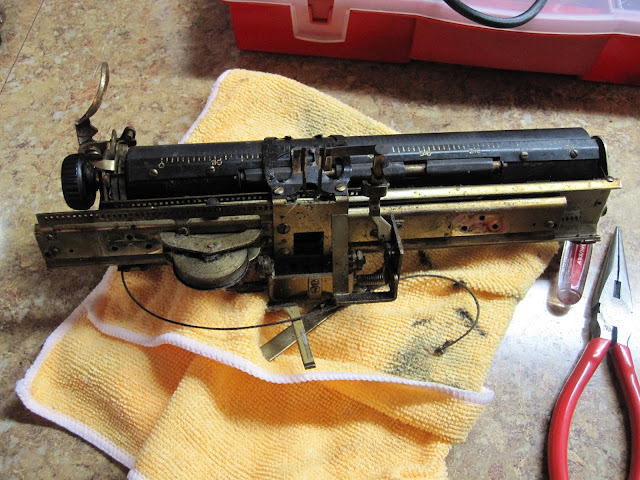 I love these earlier machines for how easy they are to deal with. Later machines get ridiculously complex sometimes. 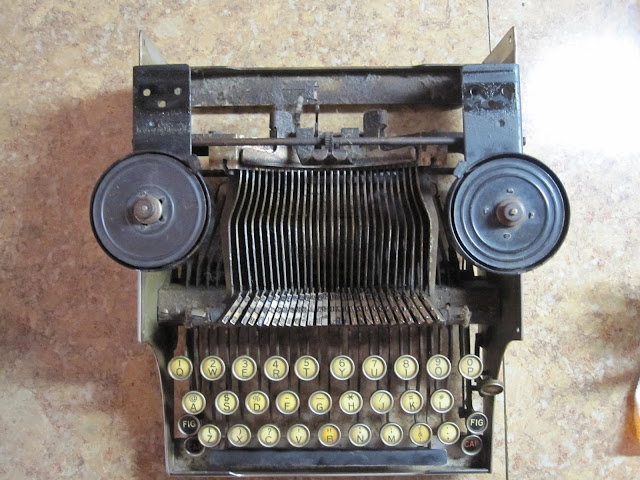 Curious as to how well the keys would clean up, I worked on Q for a few seconds. These plastic topped keys always clean up nicely. 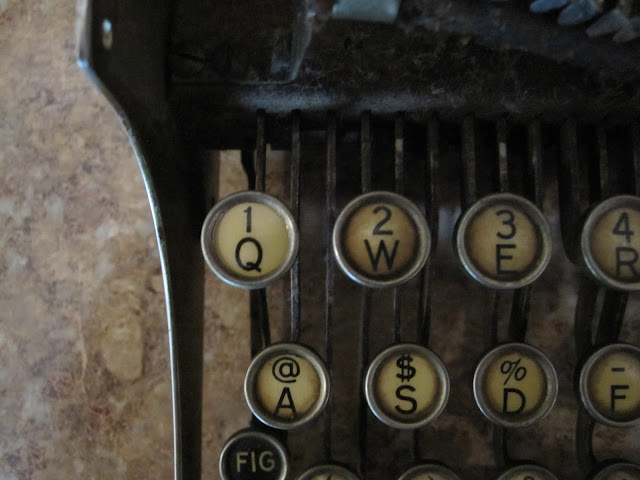 I know I say it about every machine, but I think this will be a fun little machine to type on. I love the nickel plating all over, and its got a decent action that reminds me of the Corona 3.

The only issue is that its a three-bank design, and though I absolutely love  three-bank machines, they were almost all designed by the bloody devil. Curse you, shift-necessary period! 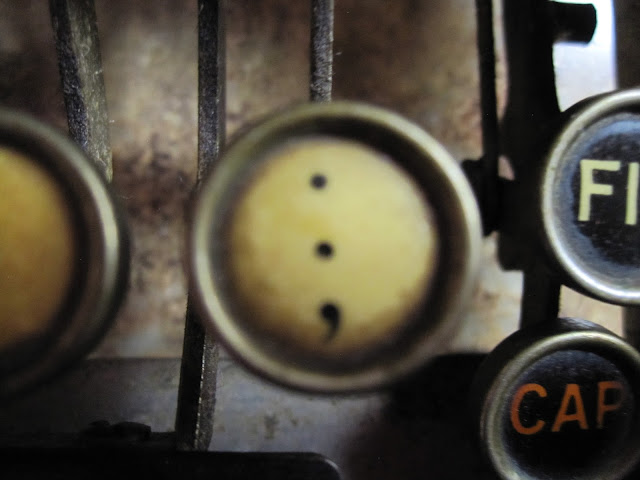 Oh, and I found this little guy at the store I had found that other Olympia SM3. It took me about a second to notice the price tag of $25, another second to check inside the case and find a flawlessly clean SM4, yet one more second to slam the case closed and book it to the front, slam the money down on the counter, and run like a madman out the door. 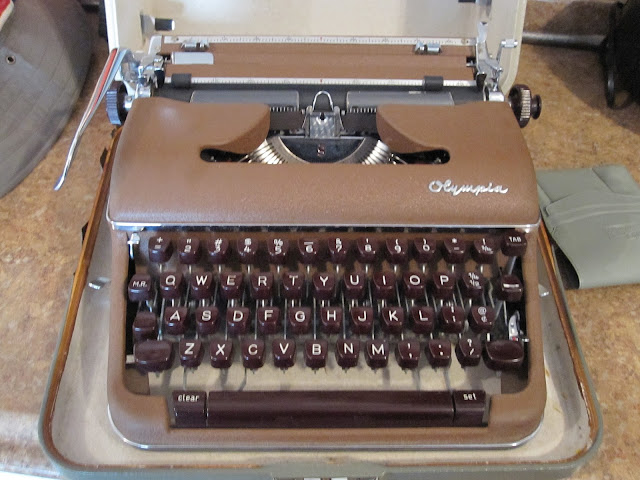