Somehow, it's been a few months since my last post. I'm going to blame poltergeists, time-traveling Deloreans, and the Soviet Union. Anyhow, onward and upward! Maybe sideward.

I've decided to expand my antiquing into the next relatable thing; tools. Preferably, antique tools I can use to restore other, antique-ier tools and items (and use for around the house if necessary to boot, why not). I'm going to shoot for finding and restoring one tool a week and, most hand tools being considerably simpler than a typewriter, that challenge is most doable. I've already learned some new tricks from cleaning up these tools that should help me be more efficient at restoring typewriters as well, something I always strive for.

First up was an early adjustable wrench. I love the wood handles those older tools had, gives them a special sort of character. 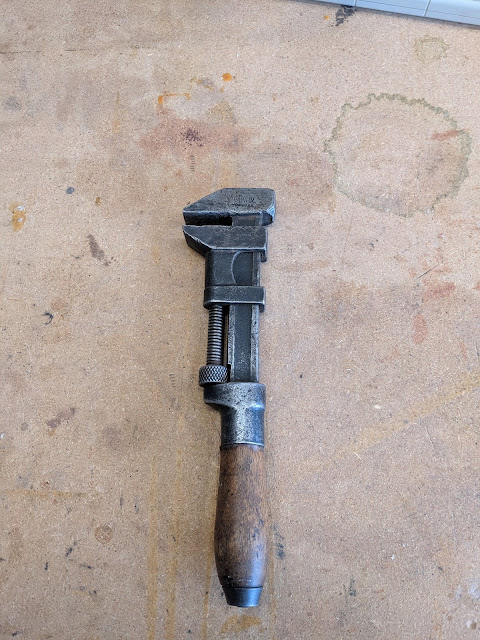 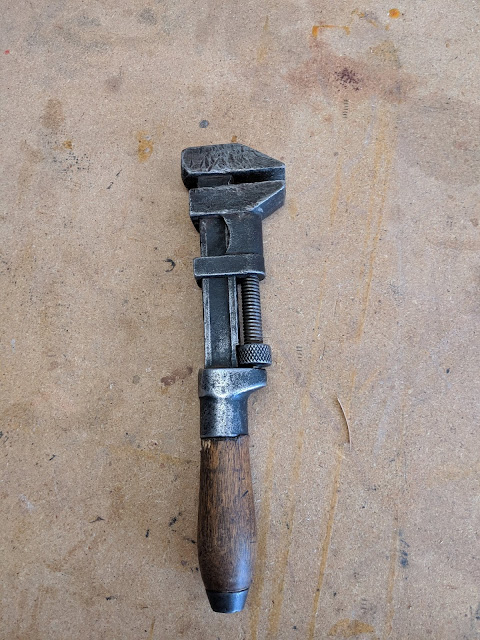 I finally realized that one of the most powerful tools for easy cleaning, and one that I had on hand without realizing it, is a drill press (electrically powered, not hand powered). Turns out, if you have even the slightest bit of imagination (I need to work on that...), you don't have to just use drill bits in said drill press. You can get buffing wheels and wire wheels that fit in it too! I grabbed a steel/brass brush wheel, threw it in, and went to town to clean up the old dirt, grime, and worn down bluing (if that is what it had). Once that was done, I used progressively finer sandpaper, having started at about 200 and working my way up to 800, to really shine up the metal. A final buffing of polish helps keep new rust away.

A bit of gentle sanding on the handle, and a new coat of danish oil, and everything was good to go. Overall, this wrench comes apart into 5 separate pieces in quick succession once you take the bottom nut off; the nut, the wood handle, the main head/handle, the adjustment screw, and the bottom head. 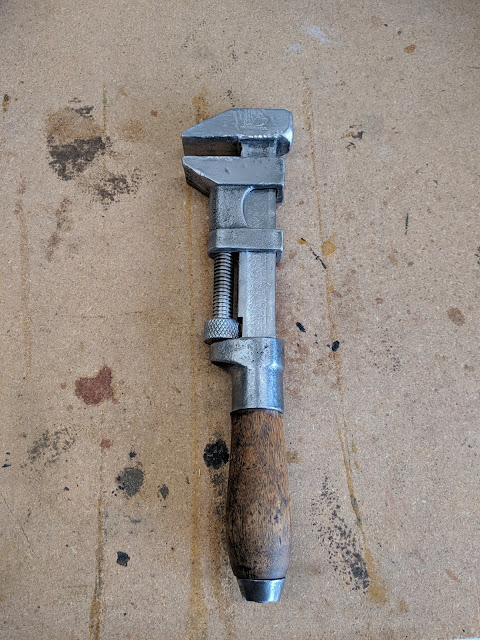 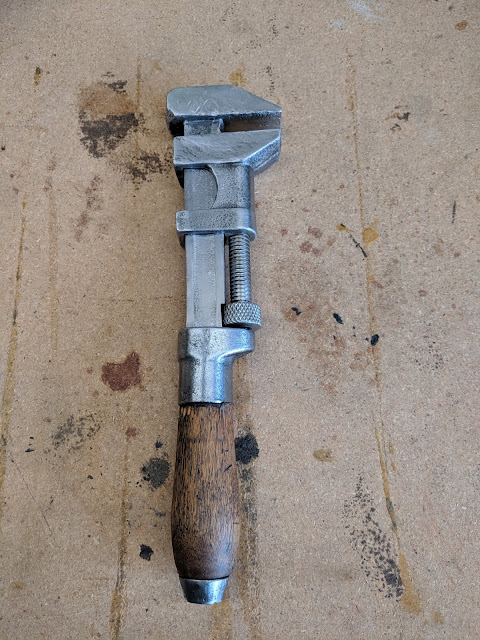 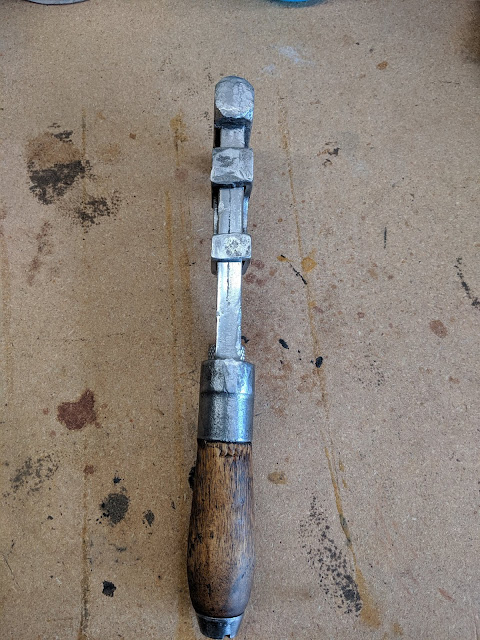 Next came the hand drill. Again, wood really makes these things have much more character than anything else. This guy was pretty rust and at first I didn't' realize the head actually ratcheted. 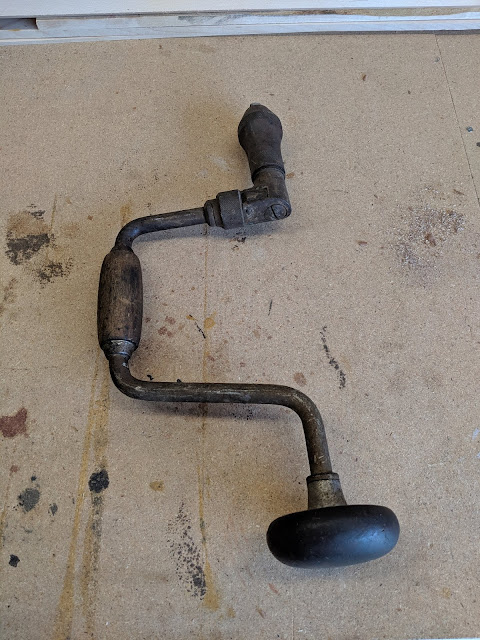 The drill press with wire brush came in the most handy again here, but I did some other experimenting first. After a liberal dose of evapo-rust gel, which got rid of most of the heavy rust, I took the clutch bit and, using a bolt, washers and a nut, I firmly loaded it into the drill press so that it was spin right round like a record. I then took sandpaper and, as it spun, cleaned up the part with ease, ending again at 800 grit before polishing it.

I could not get the top handle to come off, and the rotating handle is firmly entrenched by design, so I had to carefully work my way around those as I used the drill press brush to clean and buff the metal. A bit of sandpaper and danish oil came into play again. Once it was all said and done, I threw a modern bit in (the clamps are designed for auger bits I think, but the newer bits I have had angles that worked fine) and tried it out on a piece of 2x4. I was surprised at how speedily it drilled through the wood, and with very little effort. We get so accustomed to powered tools, we forget how truly efficient some of these hand tools were designed to be.

This guy has a ratcheting system that can easily switch from one direction to the other; I imagine it came in handy when using auger bits in tight places, or in hard wood. 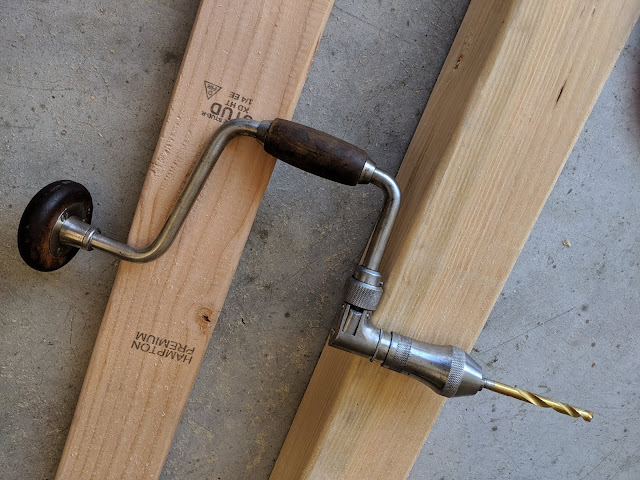 At the same time that I was working on the hand drill, I also had this being torn asunder; a hand cranked bench grinder. I've got a few worn out screwdrivers (many have snapped dealing with a stuck typerwriter screw), and some dull, cracked chisels. 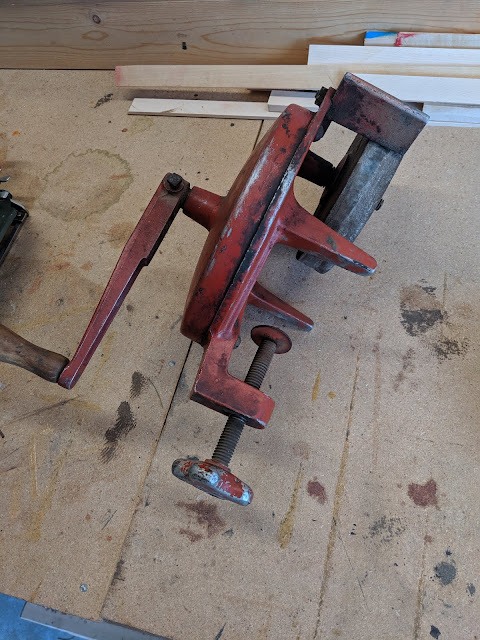 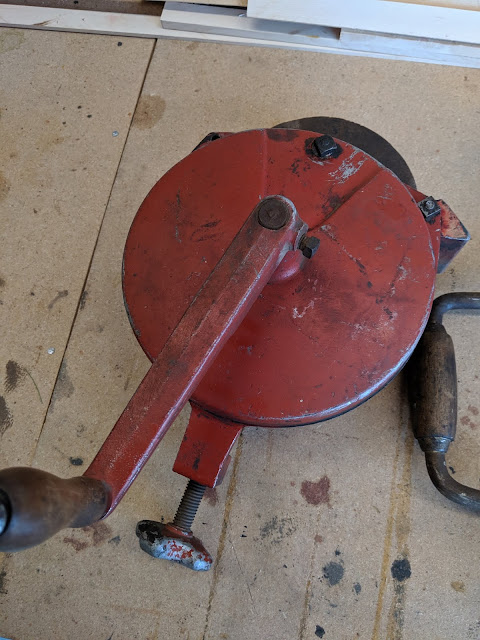 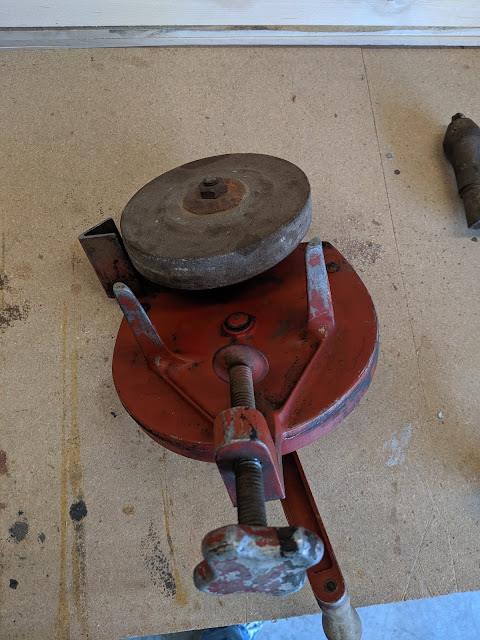 Taking this grinder apart would be easy normally, but I had to get creative due to some scratched shafts and other damage someone else did to it previously. It's very simple in design, and comes into just a few parts; the handle, the two frame plates which come apart, a single large interior gear, the smaller drive gear the wheel sits on, and the plate you hold the item being grinded on.

Rather than sanding all the old red paint off (especially when it could be lead based), I gently cleaned all the gunk off and just barely smoothed the surface with a bit snad paper and plenty of degreaser to trap any paint particulates. I always wear higher end breather masks just to be on the safe side whenever i'm in the workshop.

I decided on some metallic Cobalt blue, and got to painting. Using the drill press brush I cleaned the screws and nuts up, and got the rust that had formed on the spindles off. A generous helping of new grease was applied before reassembling the machine, and a new grinding wheel I had on hand was put on. I had to finangle the mounting nut that keeps the grinding wheel shaft on, as it wasn't long enough to have two nuts (not only that, but it only had one in the first place). A screw on the other end of it helps lock in in place. I'll need to find a shorter screw in the future, but it works for now.

You can really get cranking on this thing. The large inner gear, in tandem with the small grinder shaft, equals some serious speed. To test it out, I tried to sharpen some dull chisels I had. They turned out ok, with the error being my technique in holding the chisels one handed against the wheel. 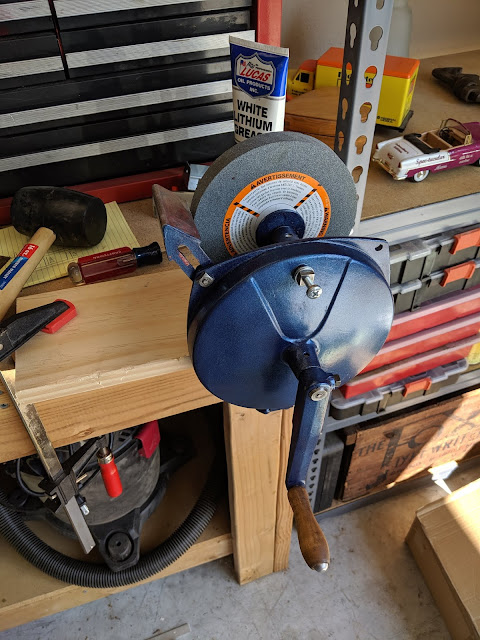 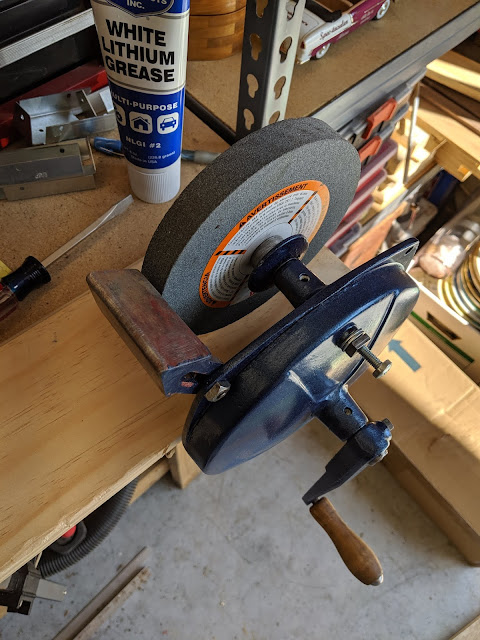 I had found the wrench at a local antique store last weekend, and found the grinder and hand drill at a store a couple hours away this weekend. I didn't walk out of that store with just the two tools, however... 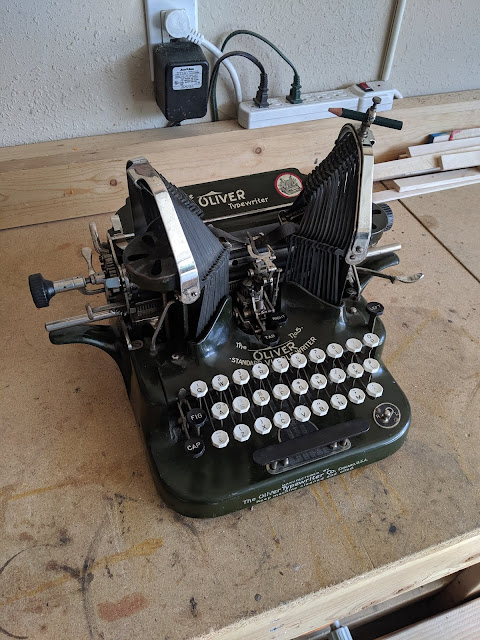 Woooaah green betty, bamalam. Olivers tend to be found with frequency in the local area, but never in this shape. Usually their paint is all bubbled or damaged, and the nickel is shot to hell. But this feller caught my eye immediately when I walked into that store; gleaming nickel plating, outstanding paint, white keys, and a very light touch on the action. I had never had the chance to play with an Oliver in this good of shape, and by golly I was not about to leave it behind.

About the only things that need done to it are;

Tune up the spacebar, as it's a bit stiff.
Lightly clean the machine; the nickel gleams but still has some residue of time on it
Blow out the dead insects inhabiting the underside
Oil
Install new drawband and ribbon

Everything else is working amazingly. Every now and again I get lapses where I just can't get going with my typewriters, but this little gal just threw me back into drive. I can't wait to get it ready to type like the farm machine it is. Not a speed queen, but rock solid.