The Curious Case of the Corona 3

Recently I acquired an early Corona 3, one of the ones with the front plate reading (Standard Folding Typewriter) and the front bar reading Standard Typewriter Company, and having ball bearing type-bars (Which I would like to mention seem superior to normal segments). 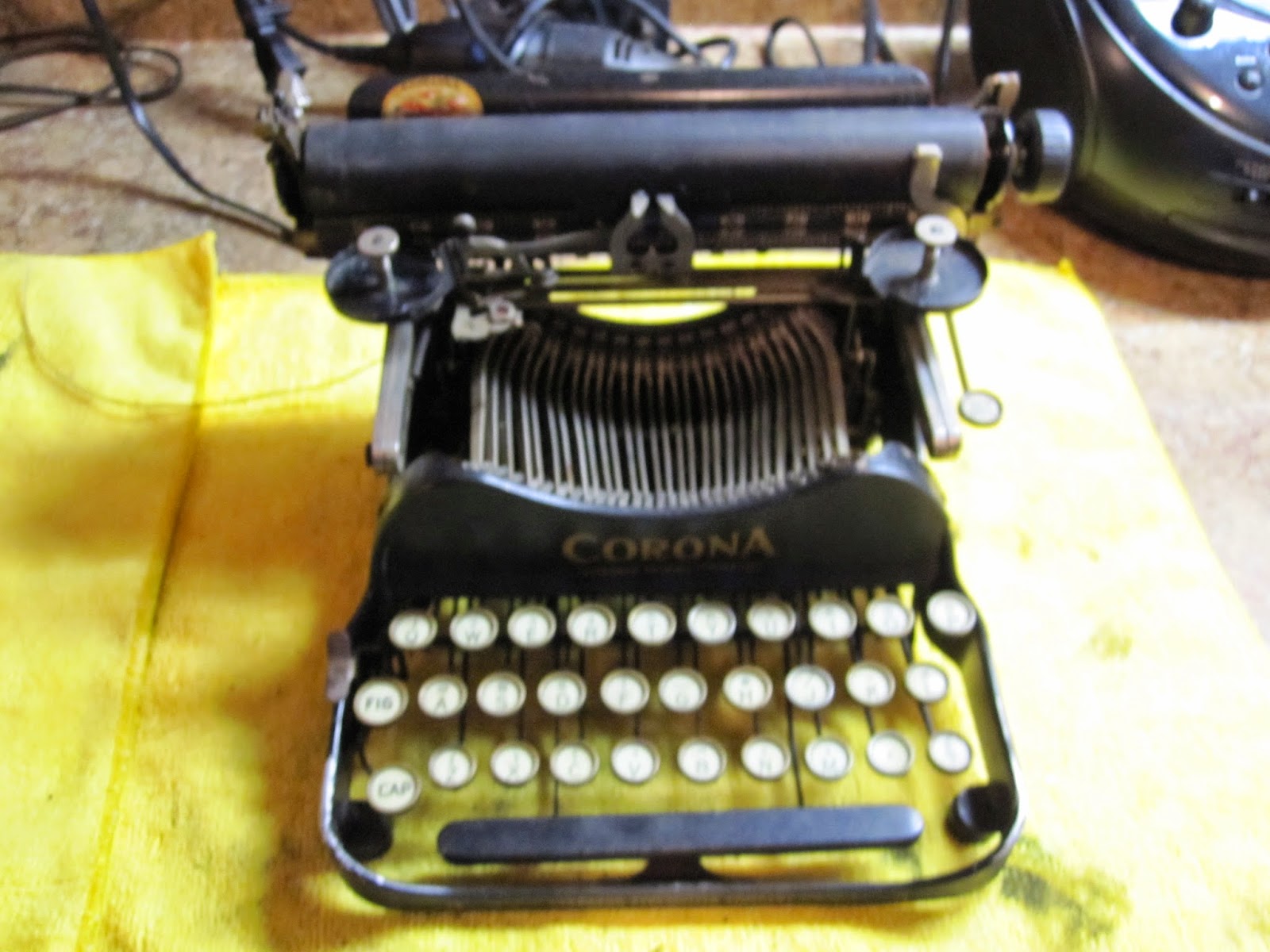 As is my standard procedure for incredibly dirty machines, I began proper dissasembly to allow a thorough cleaning. First, however, I checked the serial number on the carriage, having not found one in the normal spot on the body. 38,761 it read, much to my glee. But there being no number on the body confused me, until I remembered they are stamped on the actual underside of the body, on the rim. And indeed, there it was. 47,152. I, through some serious investigation and lab research, ended up concluding that the two numbers were indeed different. And so that brings me to the first curiosity I'm to ponder.
(Update) I've just read through the newest edition of ETCetera and found that all the early coronas with the subtitle have a difference of serial number. One curiosity down.

Which serial number truly represents the machine?
I can only surmise that the body serial number, though being higher, is the true representation of how I should go about identifying this machine. The body of the machine is its base, after all. But what do you, fellow typo-spherians, think of this issue?
In any case, it means this little machine was (I can assume) at one point rebuilt to some degree, early on.

Later, as I began to clean the type-bars, I noticed the second peculiarity; 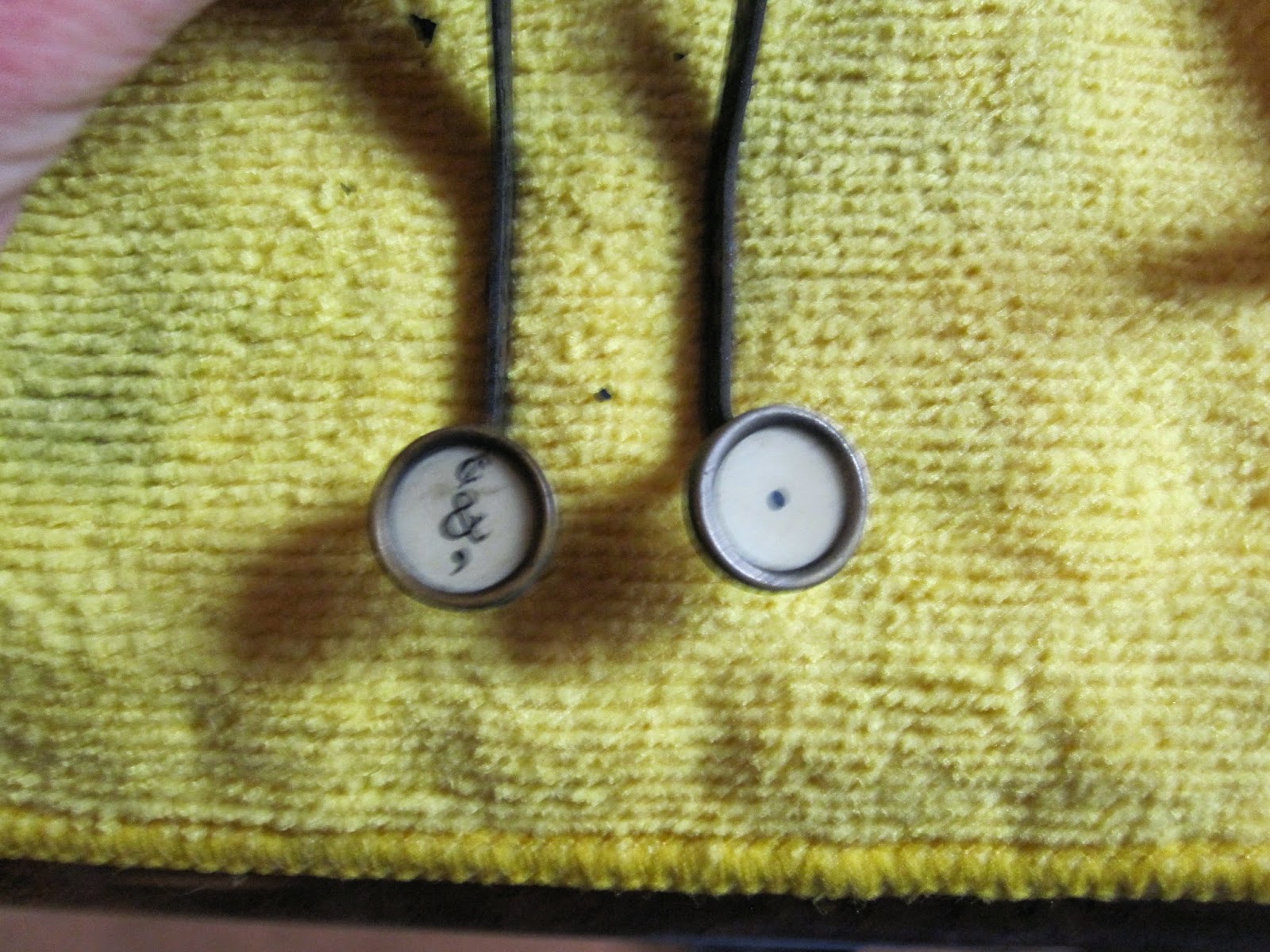 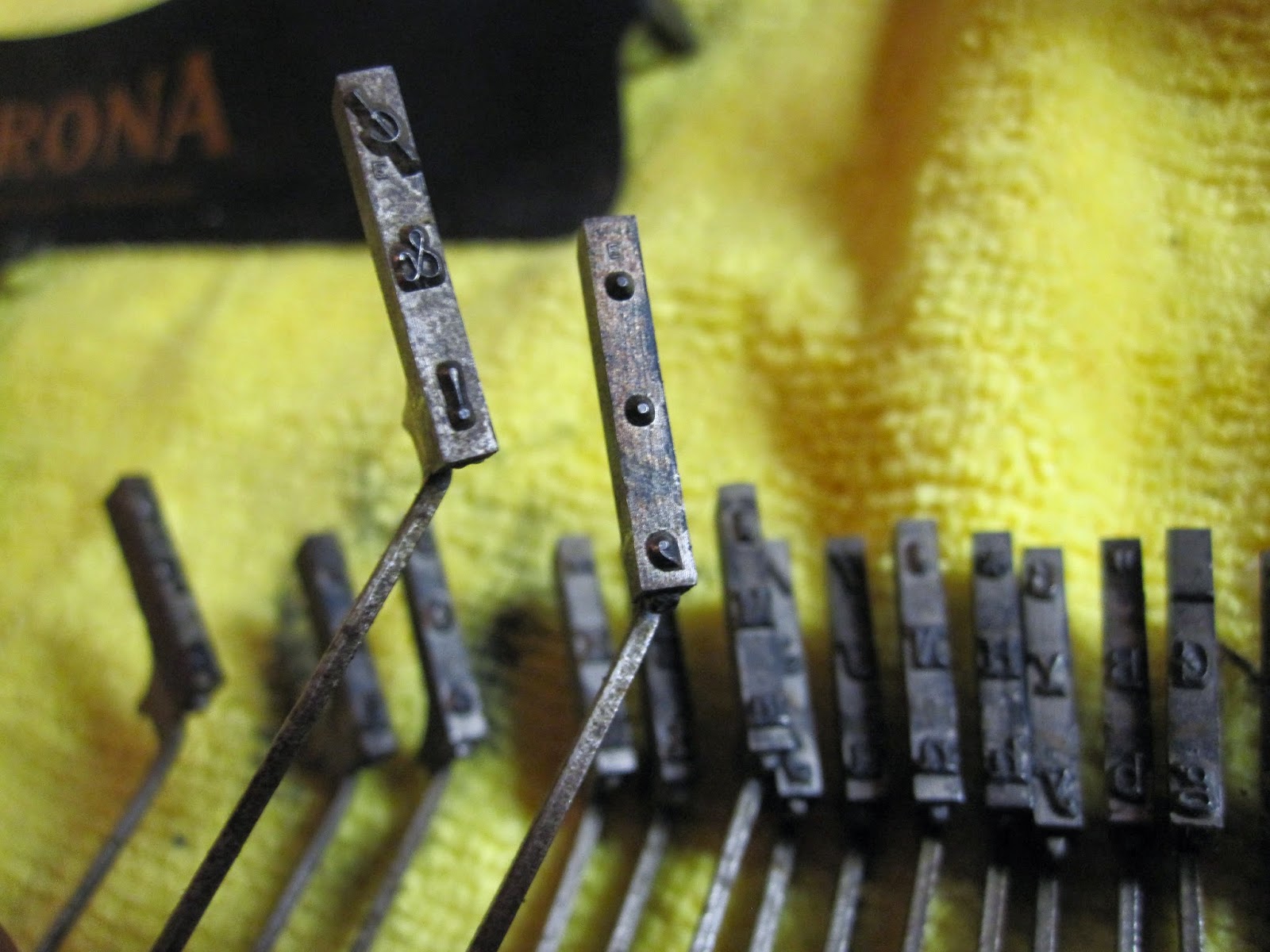 After once more engaging in research never before seen, and after consulting the leading experts in the fields of the language and grammar, I was shocked to learn that periods and commas are not the same thing. Nor are commas exclamation marks or vise-versa. Shocked, in utter disbelief, my entire universe tossed into turmoil. And more importantly, I stumbled into the second of my curiousitys.

Why does my machine have a key for periods only, yet the type of a very early 3 bank? (The period/period/comma can also be found on Fox portables. Never forget the Fox.)

Again my conclusion is that the machine was rebuilt at one point, but surely any sane individual doing so would recognize that you cannot type more than a sentence without realizing it just keeps being comma'd, rather than being allowed to end at long last with a period.
If you have a theory on this awkward inconvenience, let me know. How people ever were ok with shifting to end a sentence... well, we've clearly evolved as a society. I'll say that much.

End Note: What a little tender loving care wont do. These didn't even look like they were plated at first, they were so filthy. (Top one is for reference.) 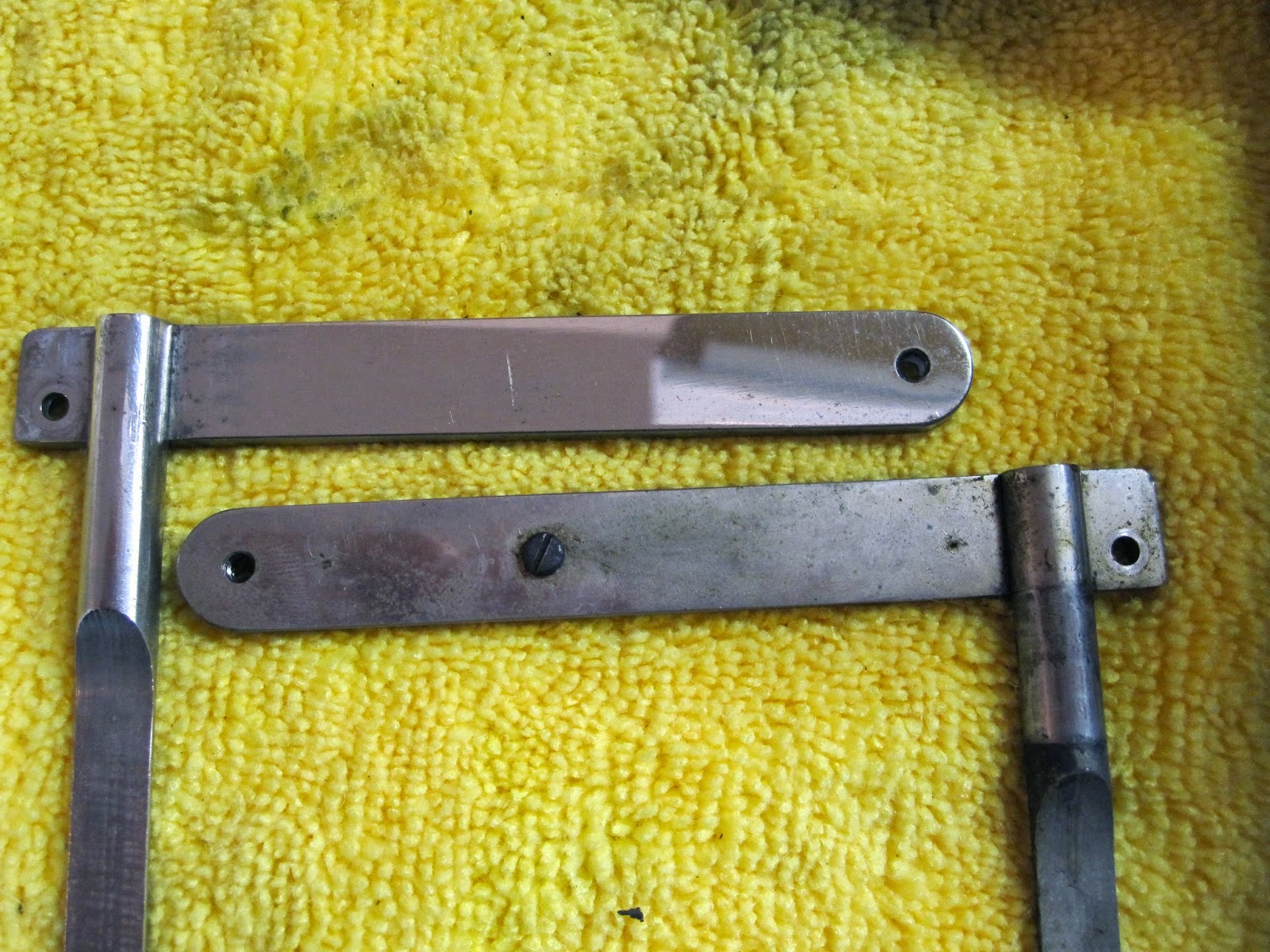 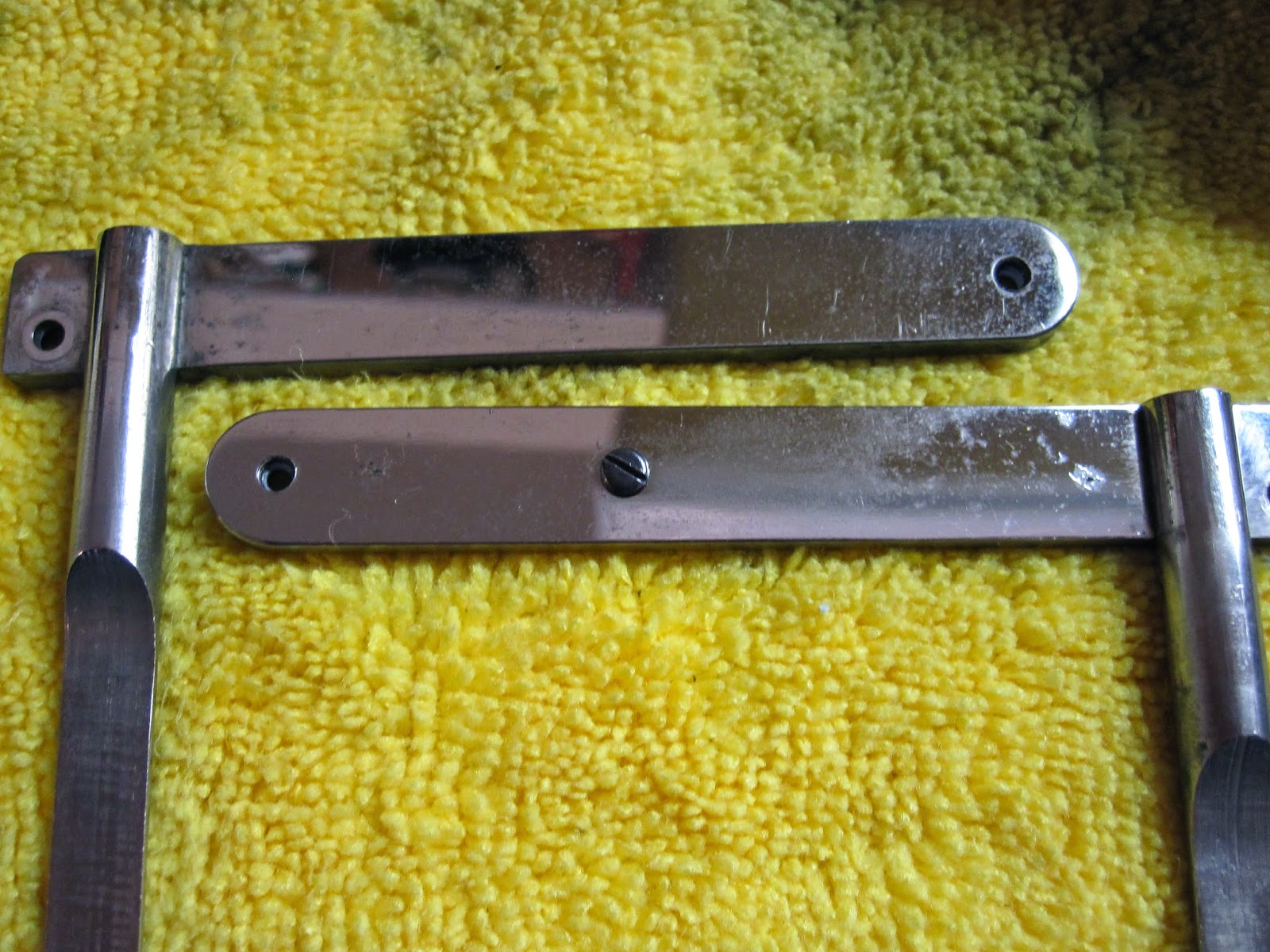 Yes, I think I may very well have an addiction to the Fox Typewriter. But hey, it IS the best typewriter around you know... 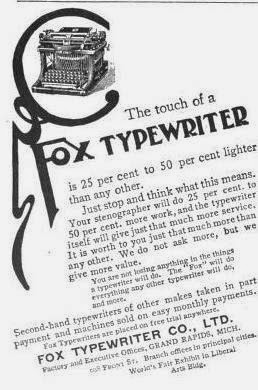 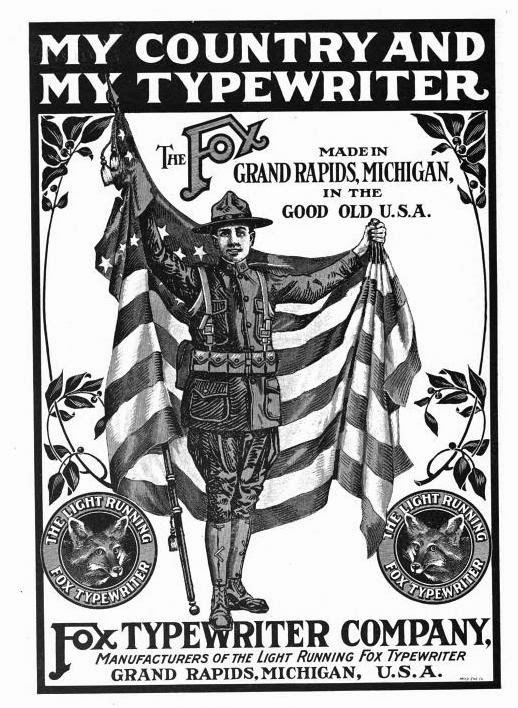 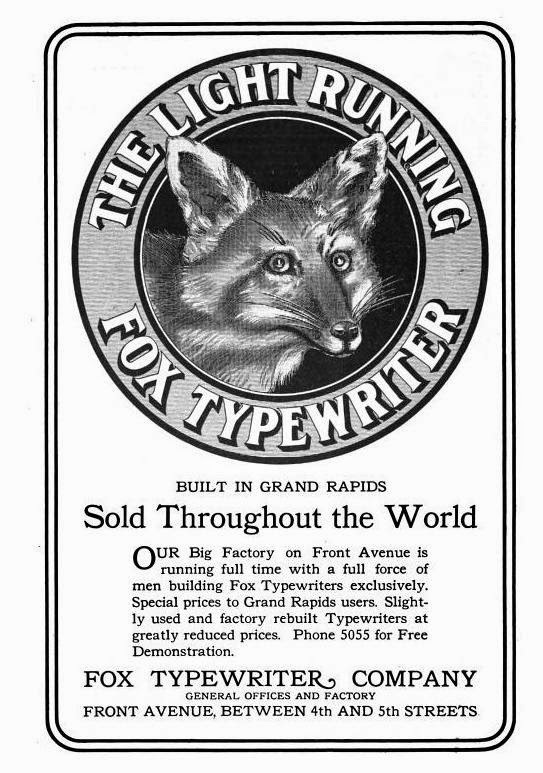 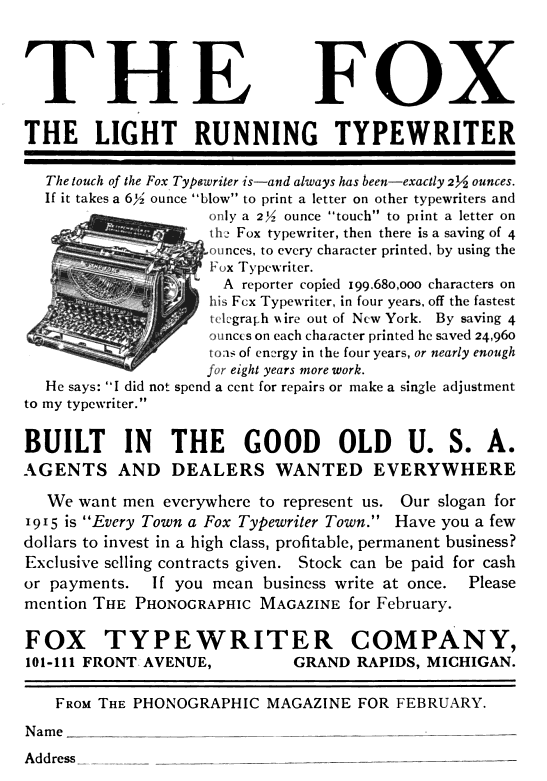 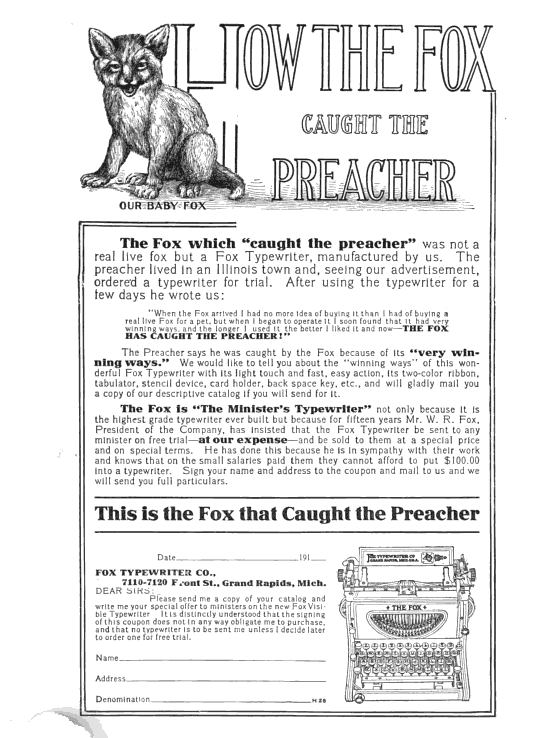 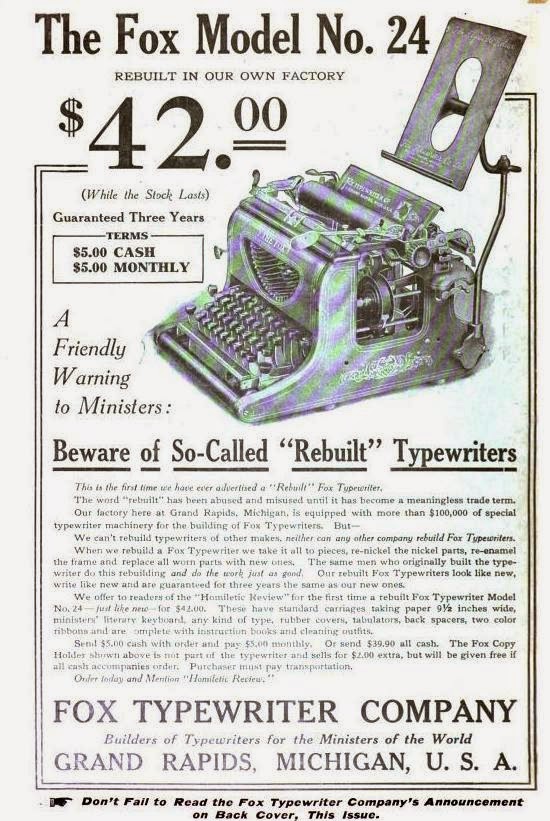 In my opinion, nothing shouts "Typewriter" so much as an Underwood 5. Its strong cast iron frame and exposed mechanics have a strong beauty all its own that shows the transition from the 1800's to the 1900's.It is also interesting to note the design choices made by Underwood in building its famous desktop machine, which prove that it was in essence "Unrefined" so to speak. Case in point is the escapement. Of all the machines I've had the fortune to delve into, the Underwood 5's escapement is the most bearish, brutish, and beastly of them all. I could only think as much as I took it off the framework, and stared at it contemplating how long it would take to clean the entire thing. Well, 4 days after starting and roughly 6 or 7 hours (Maybe more. Alas that I don't have a time-punch to tell me just how many ticks of the clock I've devoted to my repair bench in a day), I am quite pleased with the results and happy that the most intricate part of the entire machine is done.

I took the entire thing apart, down to every screw. I then cleaned and painted the appropriate pieces (Mind you most of the metal is actually supposed to be blued I believe. I used black lacquer to restore it all, though.). I would caution anyone who wants to take these apart of the geared wheel; I, foolishly in my haste, did not anticipate ball-bearings. Not only are there ball bearings, there are 16 of them. Very teeny, tiny ball bearings. And they are not fun to put back into their correct spots. Other than that, the rest is easy. 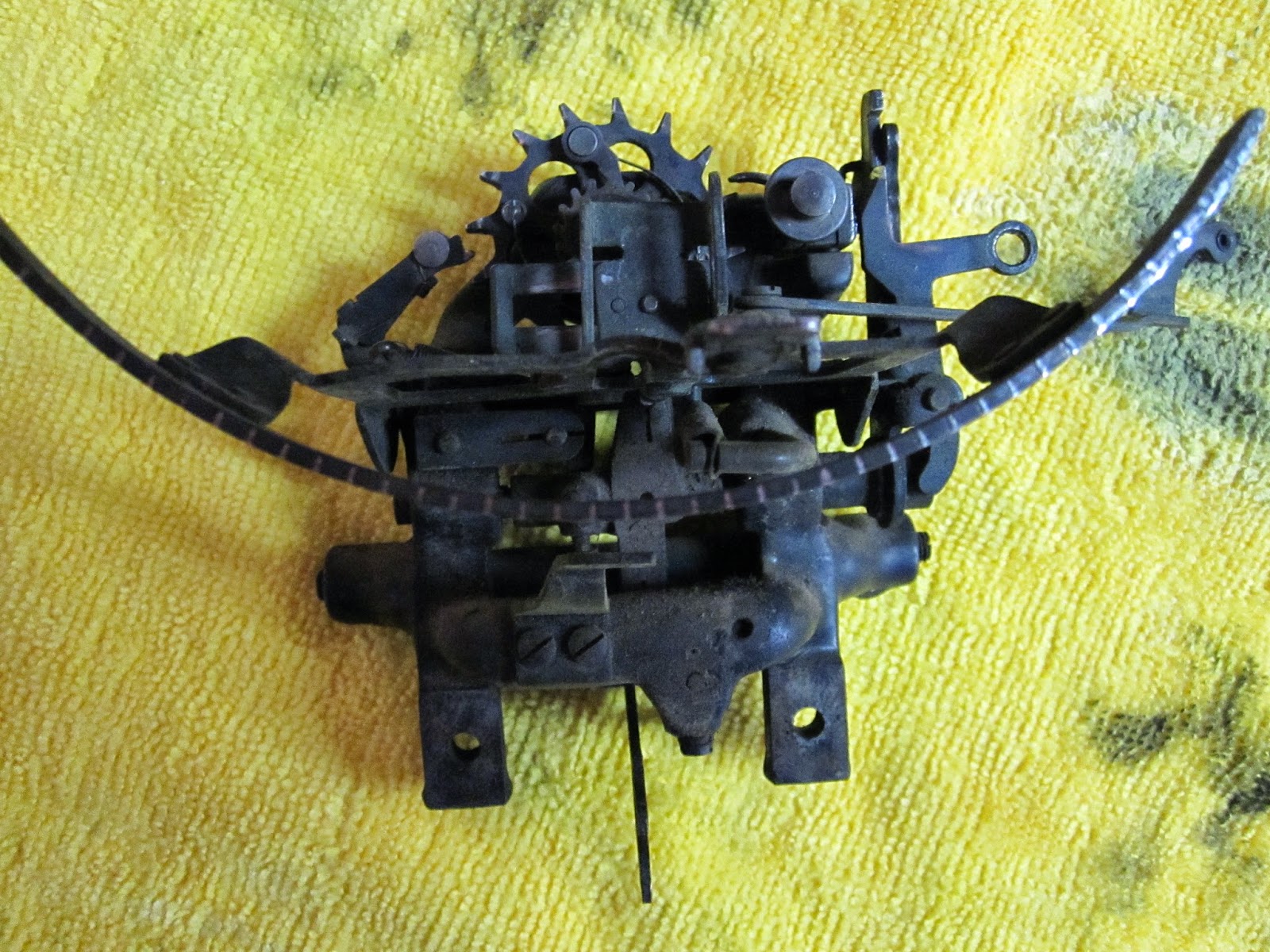 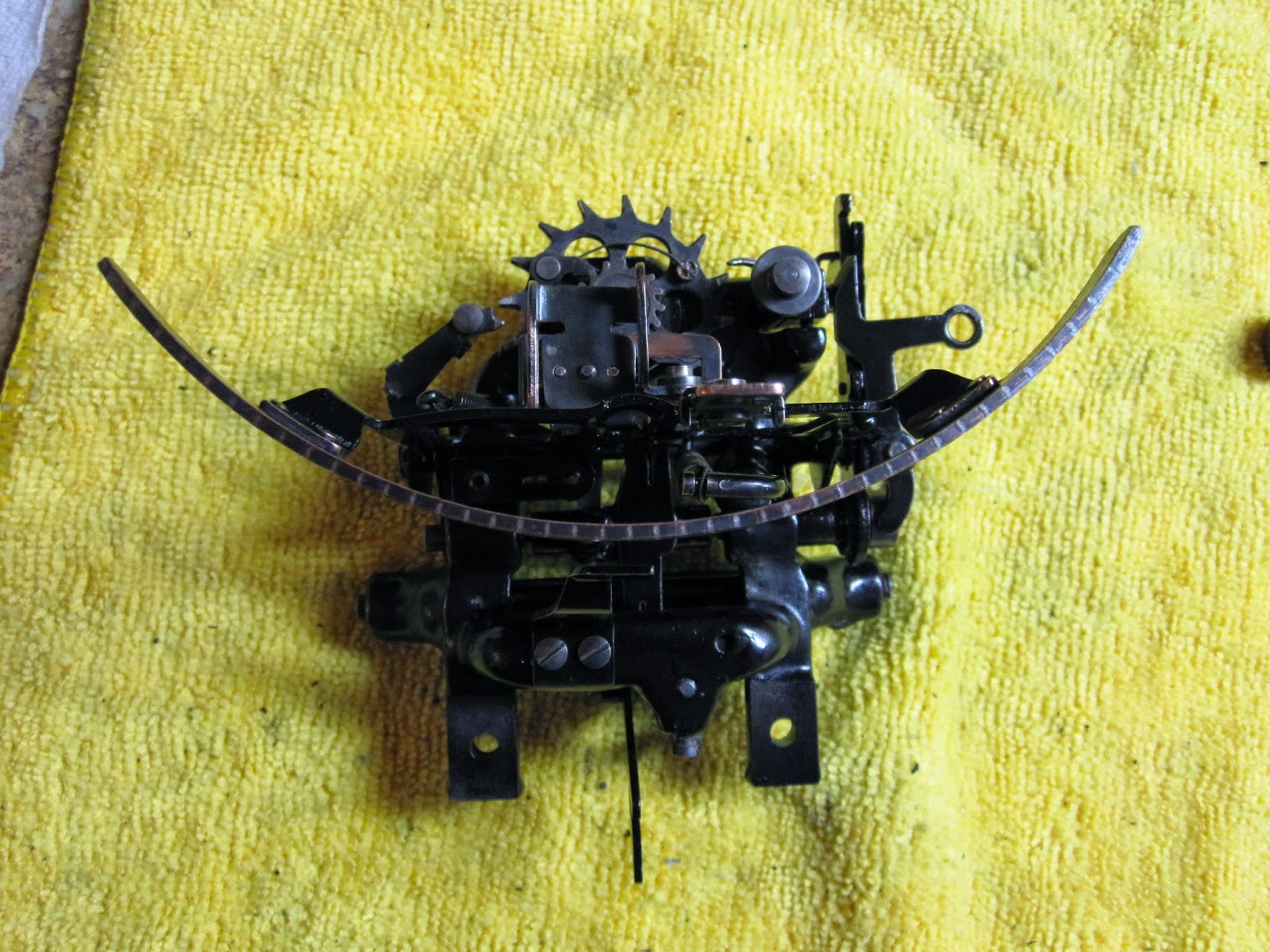 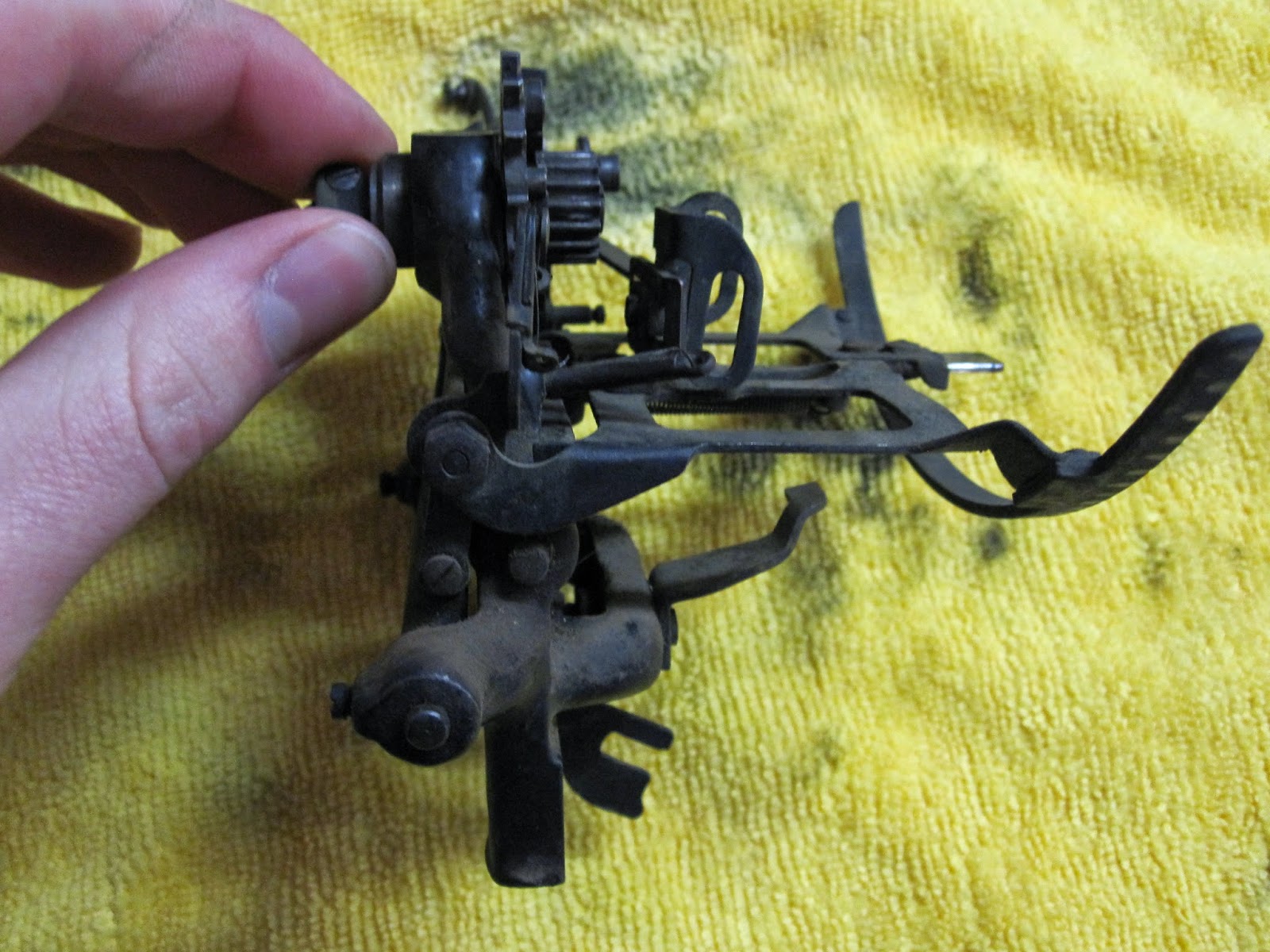 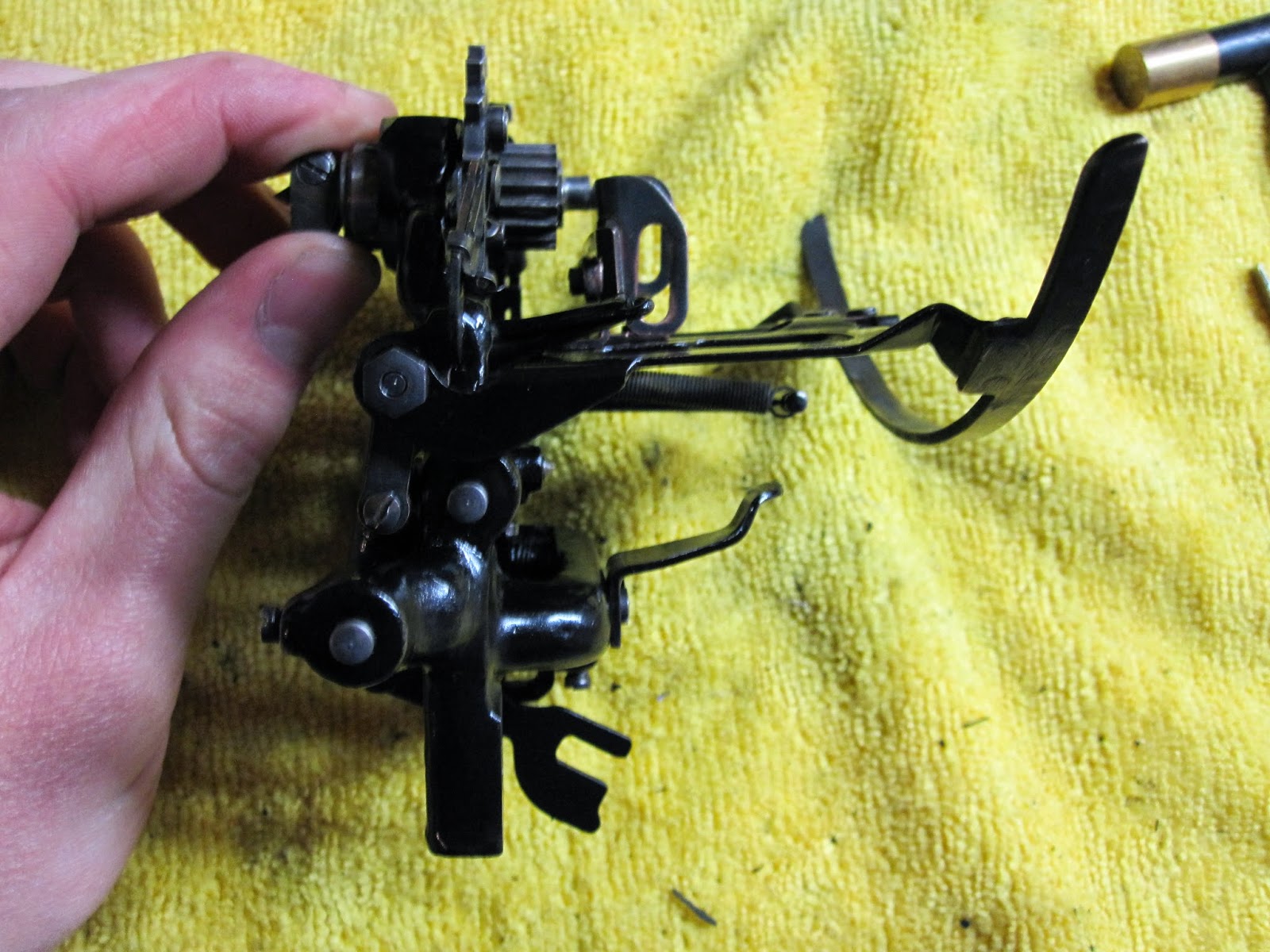 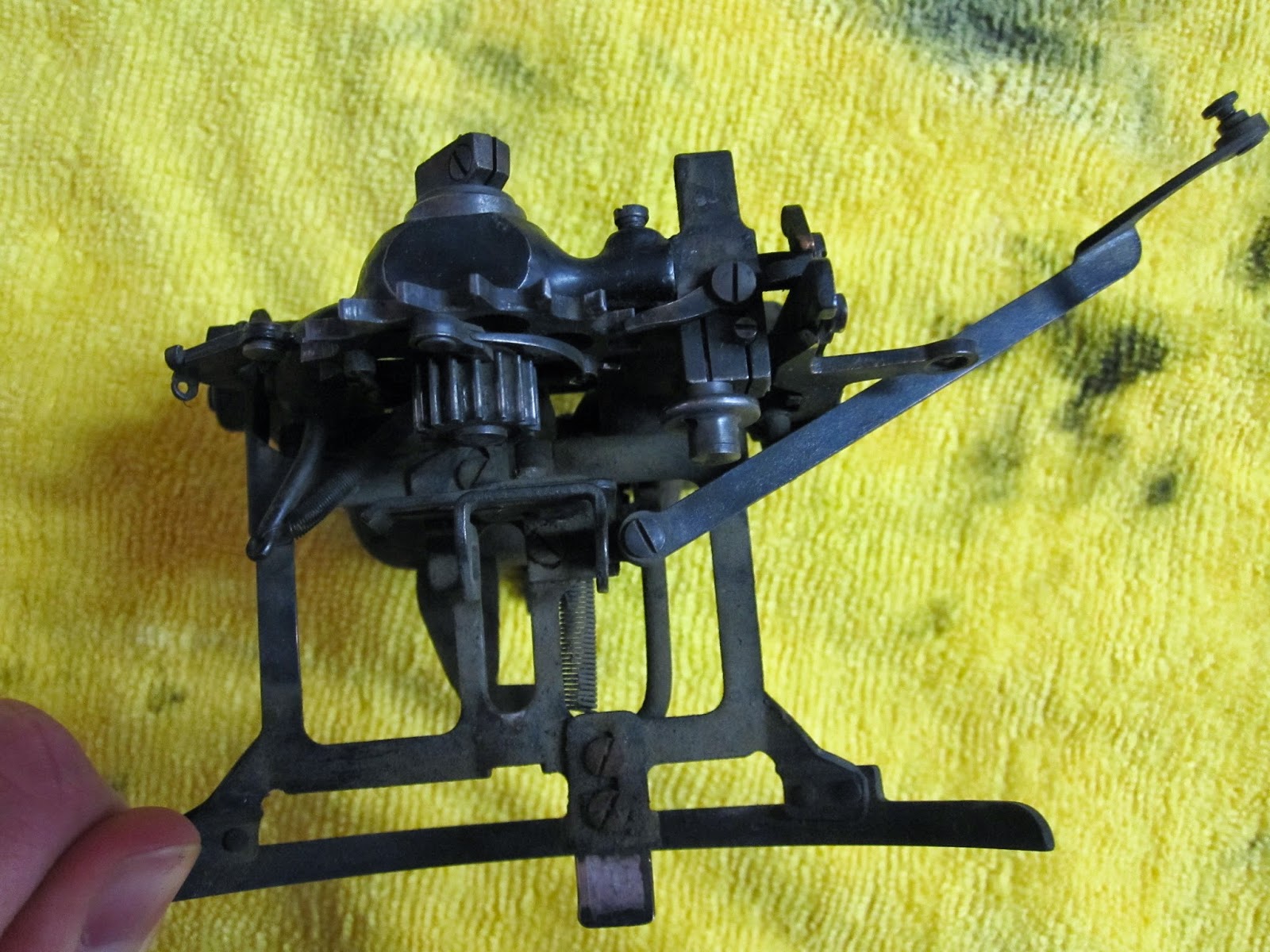 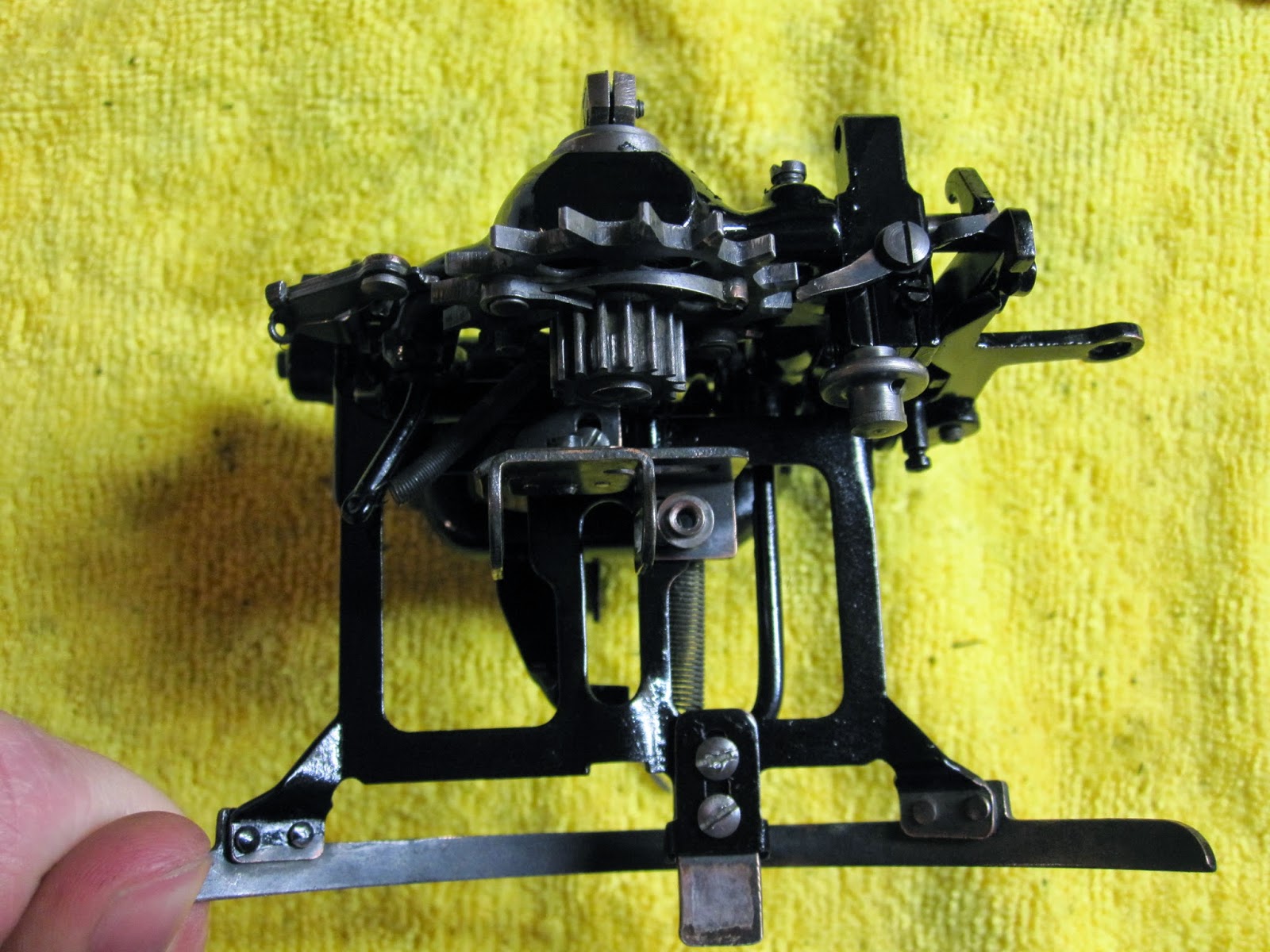 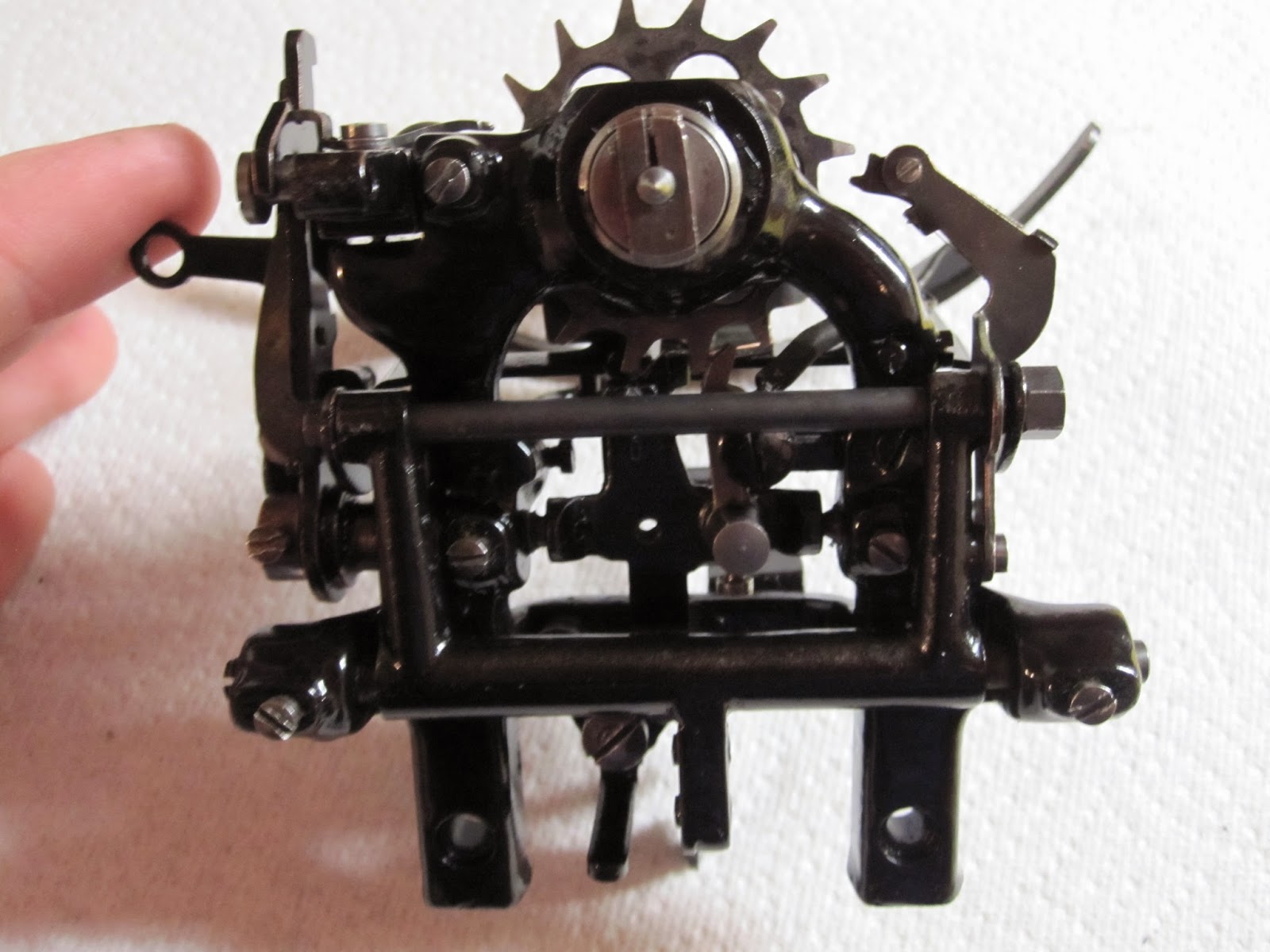 From What Typewriter? A Guessing Game, Part 1

I've a few separate machines on the operating table as of the moment, and thought that I would see how well the Typosphere knows the random bits and pieces of the innumerable machine makes and models out there.

Object 1:
Clearly a key lever. But from what machine did this come from? 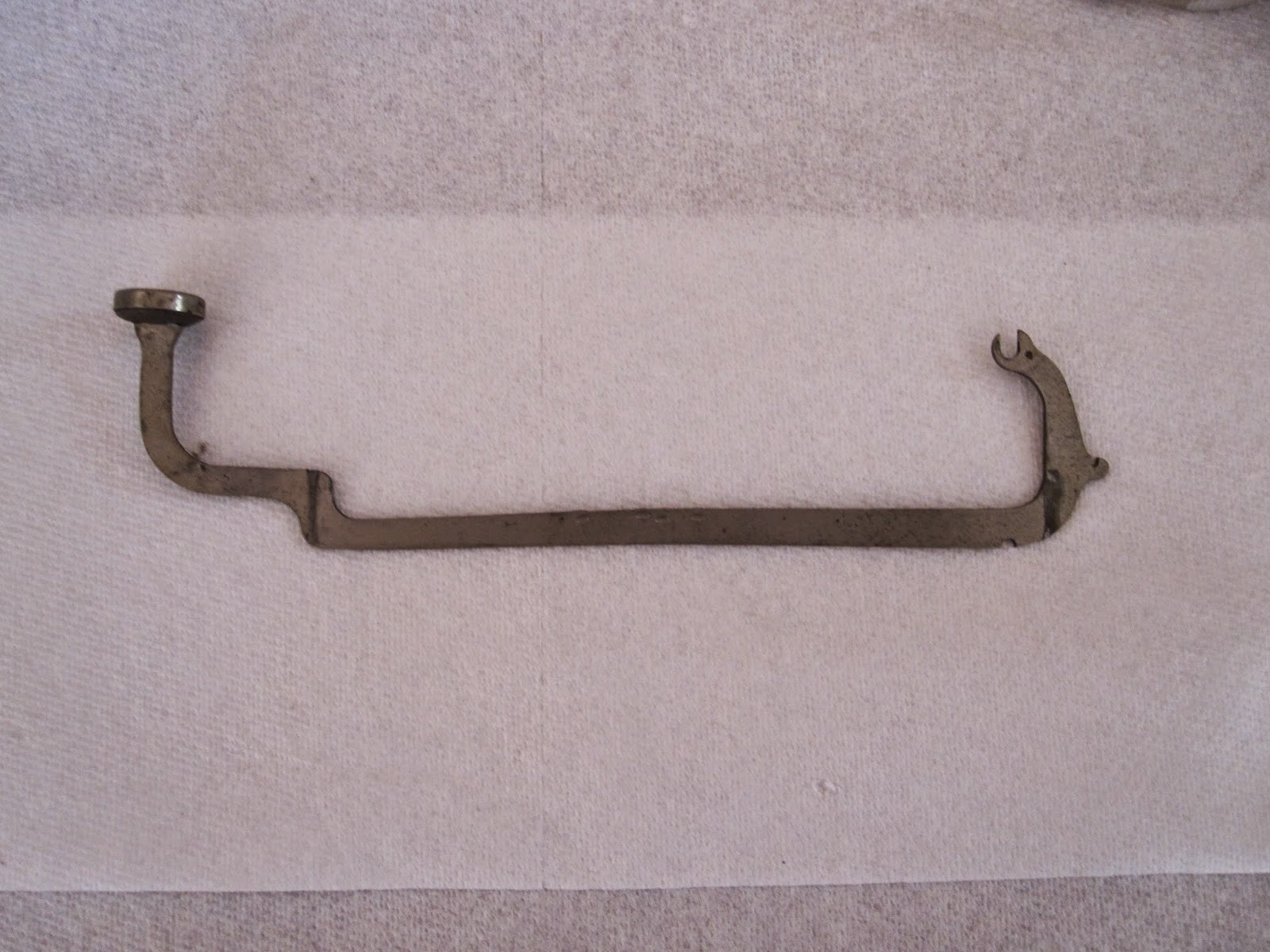 Object 2:
Of all the machines which I've taken down to pieces to clean and restore, this particular machine has by far the most unique type-bar design. 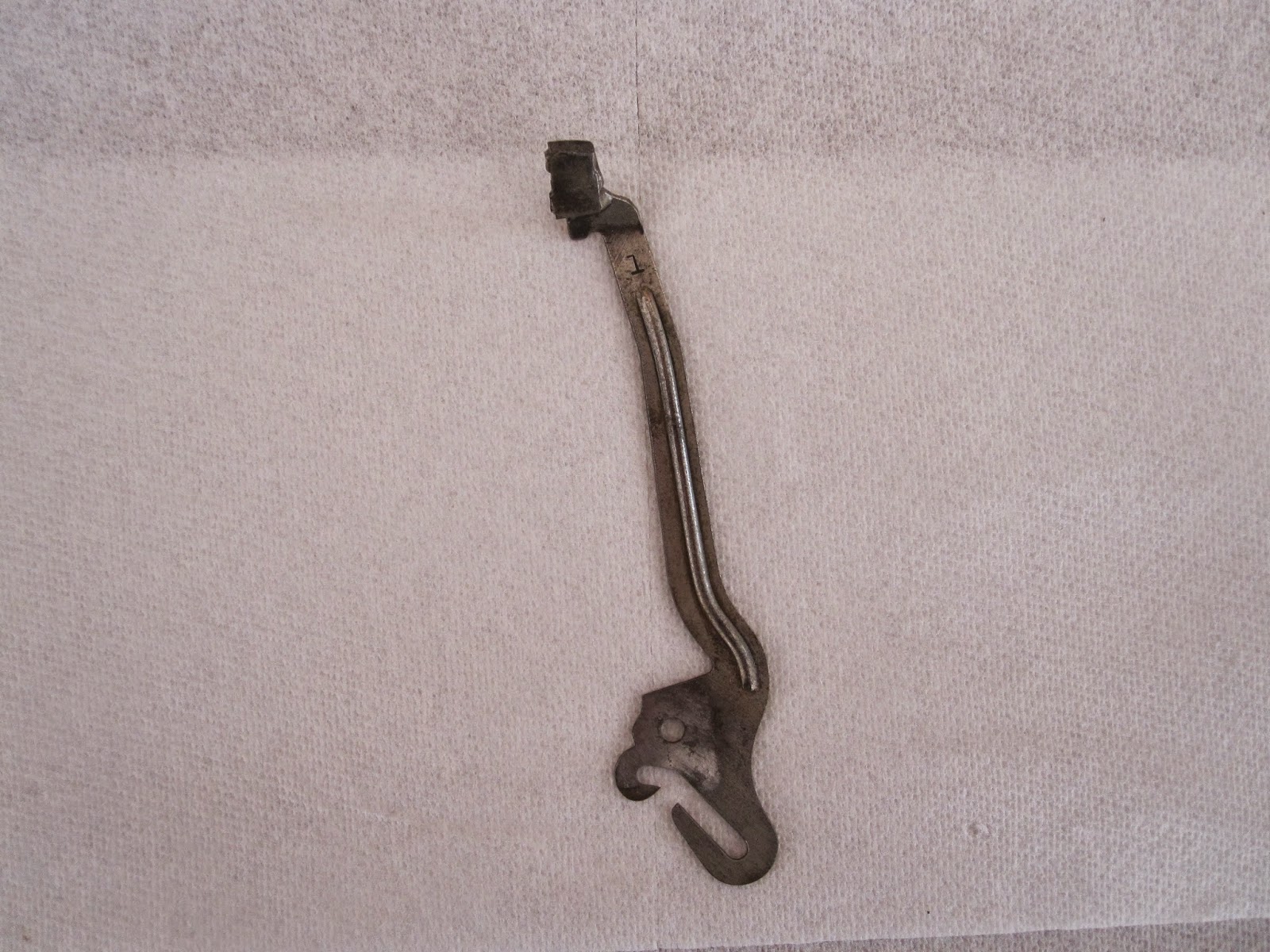 Object 3:
Another type-bar, but with its own unique twist; This type-bar is only about 2 and a half inches in length. 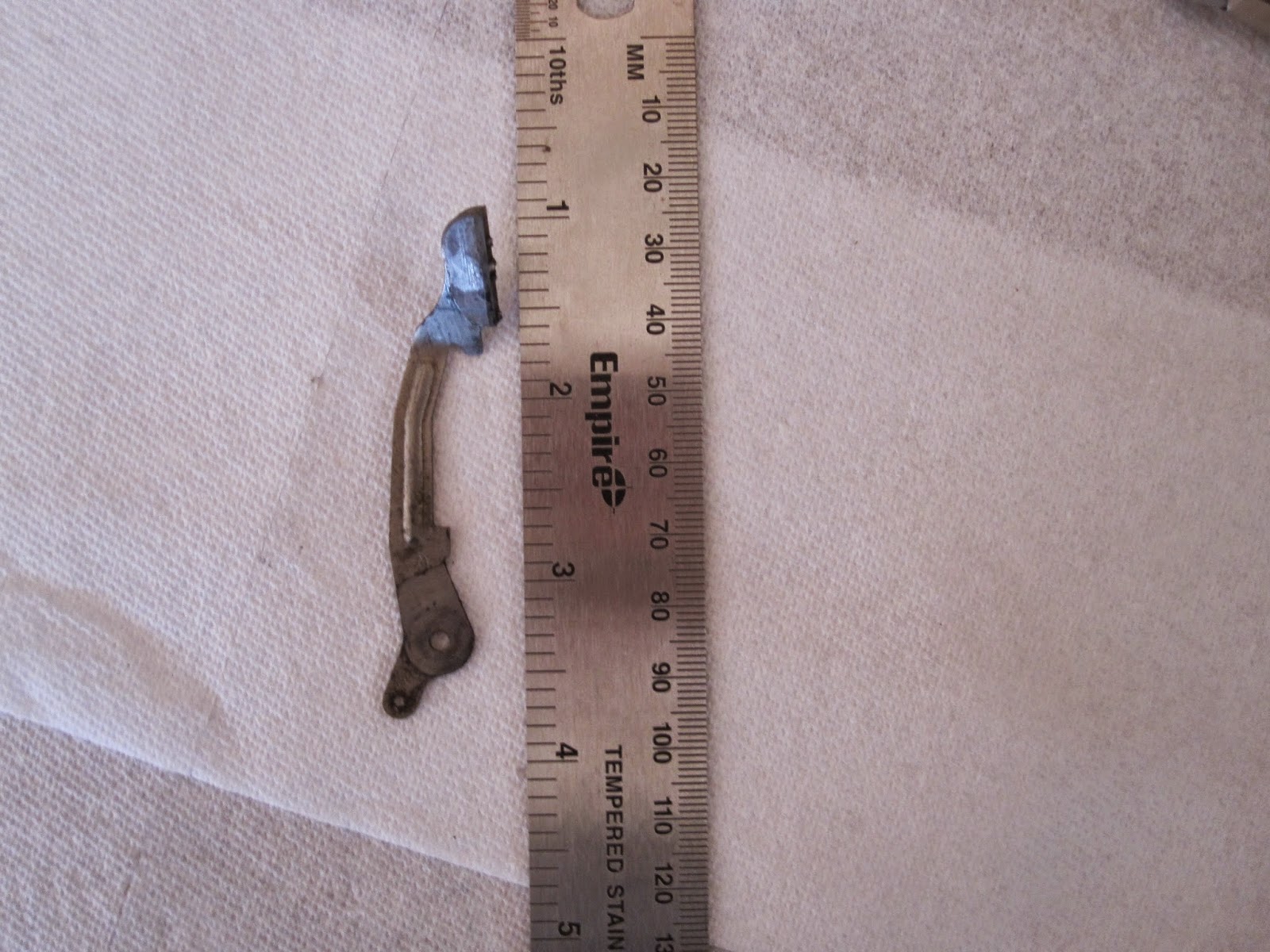 Object 4:
A switch with a balled top. A curious feature that not many typewriters often use. This is looking at it as if you were peering from the inside of the machine outwards. 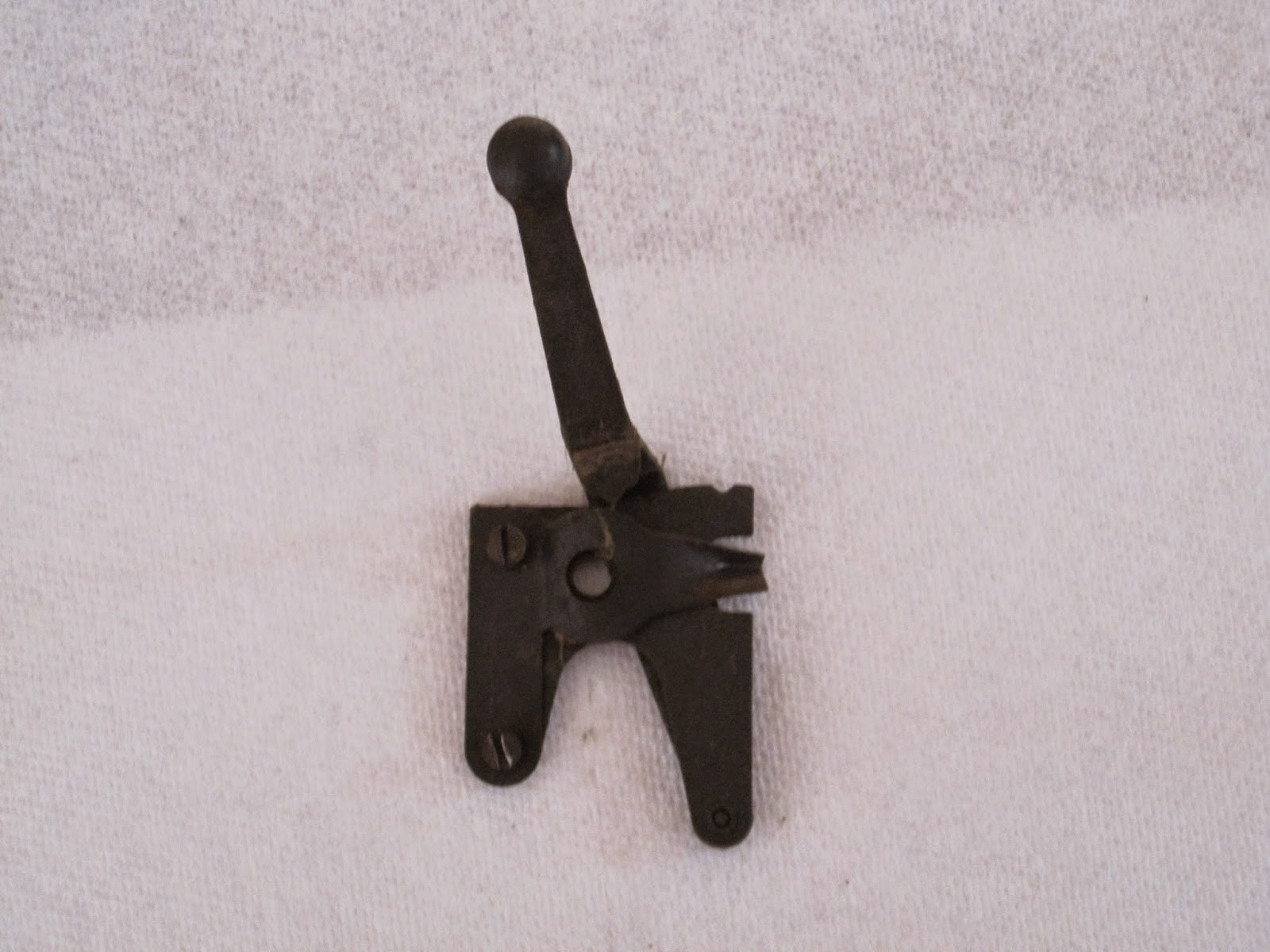 Patents. The omen of the Fox Typewriter Company, I swear.
From what I am able to tell, Underwood sued Fox due it distributing typewriters with tabulating attachments, specifically in New York. Underwood seems to have proved sufficient evidence for the previous judge and the currently shown judge that Fox had indeed infringed upon its patent and, therefore, illegally sold said machines in the district herein present.

Based on the date, the machine owned by Davis Typewriter Works may be an example of the machines in question.
(http://davistypewriters.blogspot.com/2011/03/dtw-wreck-report.html) 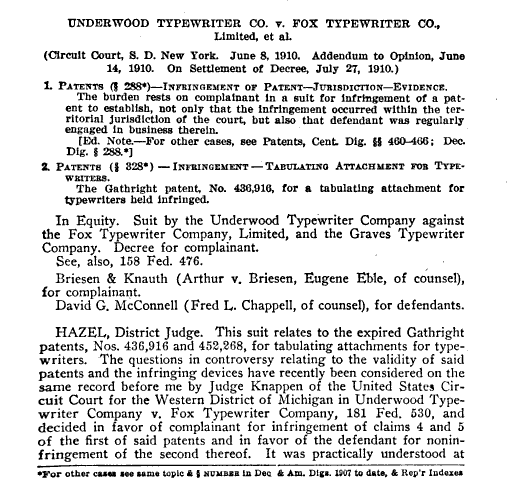 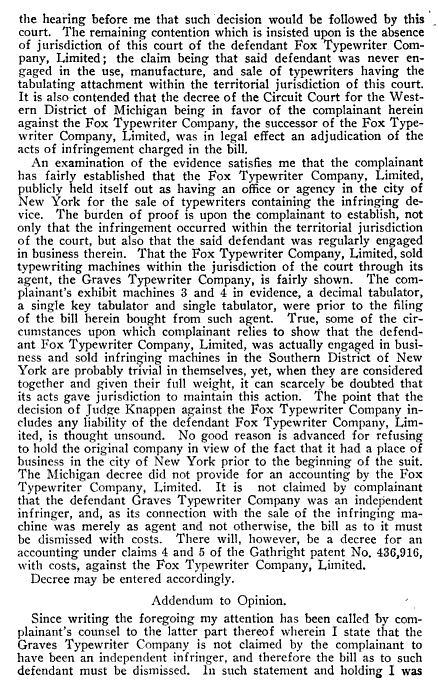 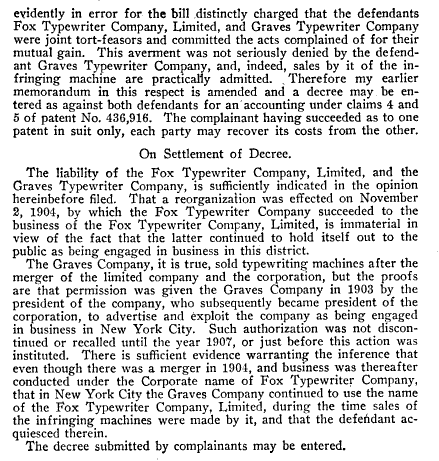 Posted by Words are Winged at 2:49 PM No comments: