Evolution of the Fox Portables Part 1: Early No.1's to Late No. 1's

As with most machines, the basic initial design of the Fox Portable was slowly modified, improved through changes that somewhat effected the efficiency of the machine. Whether those improvements were noticeable to the general typewriting public at the time or whether such improvements only were noticeable after years and years of use is, of course, speculation. One might look at the release of the No. 2 as the moment of change between the No. 1 and its successor, but the truth is different. Below, I showcase those small changes which I found to have occurred during the complete dissection of two Fox Portable No. 1’s; one a very early machine (Serial Number 319) and the other a later example (Serial Number 7,472)

*Shifting Spring*
The Fox eases the amount of pressure required to press the Capital or Figure keys via springs attached to the comb and the arms of the shifting action. Early No.1’s have a single, incredibly thick spring on the right side of the comb which attaches to a small lip on the right side of the central shifting rod. You can see this on the picture below, top picture. At some point, Fox chose to switch to two smaller springs which still attached to the comb, but rather than attaching directly to the shifting arm, they pull on the end of a thin hooked rod which then provides lift on the opposite end, that end putting pressure on the shifting support arms near the slotted segment. You can see the spring changes in the picture below, bottom picture. 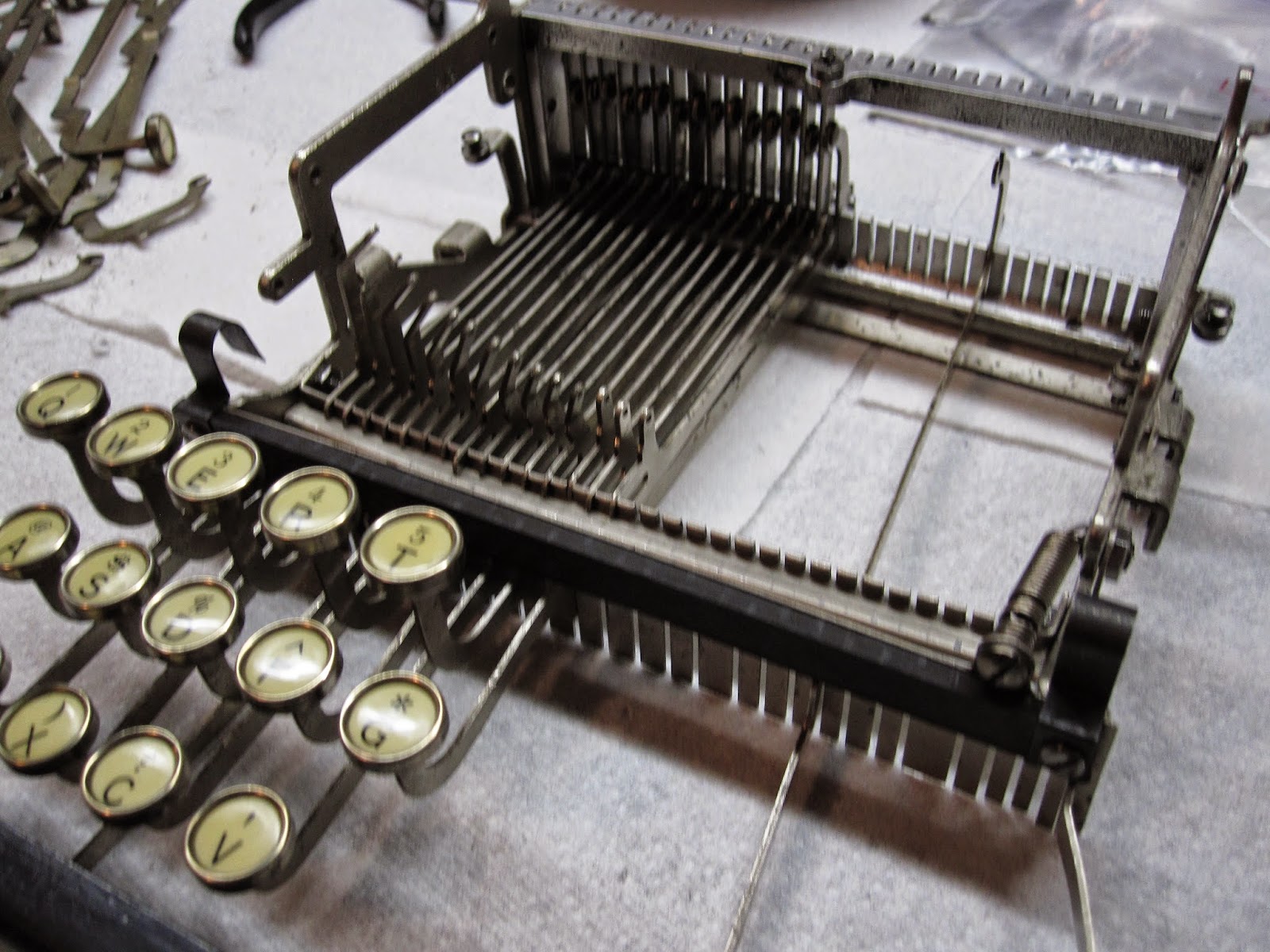 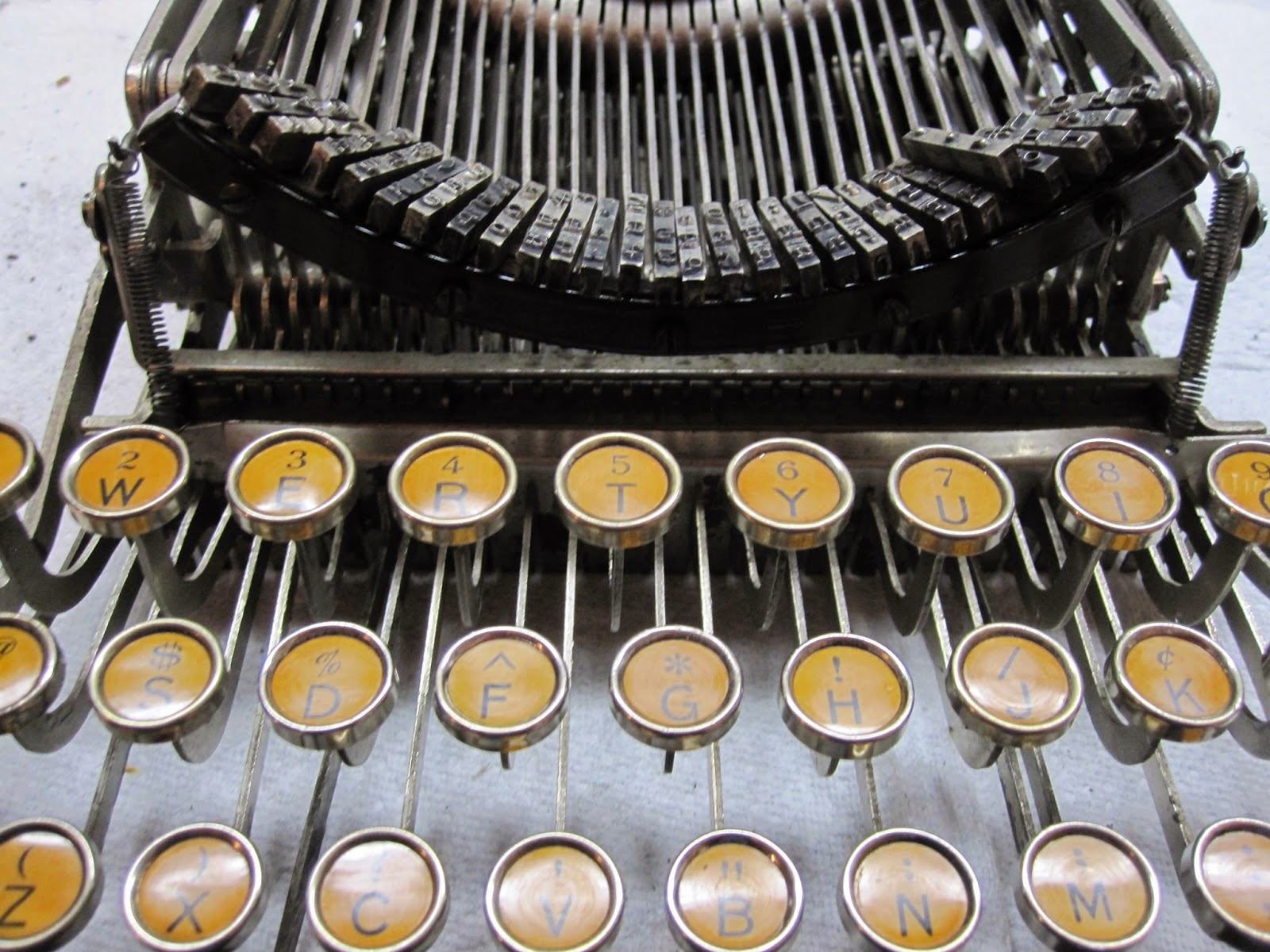 *Keystroke depression aids*
As far as I can tell, the two black bent pieces of metal (See above, top picture) which are fitted in on the left and right of the comb are designed to stop the bar which moves when a key is pressed (which connects to the back bar which then pushes against the necessary pieces of the carriage allowing a keystroke to cause the vibrator to move and the carriage to advance). In practice, however, they seem not to benefit the machine in any particular way; In having operated the machine with and without them in place, there is no notable difference. This may be the reason for them no longer being used in the production of the machine at later dates (See above, bottom picture)

*Keystroke action piece*
For lack of a better term for this piece, I simply name it as above. As previously stated, when a keystroke occurs, a bar is pushed which operates the carriage in effect. On earlier models (See below, on the top), the design for the piece is simpler. Having seen both the earlier and later models in action, I must declare the later models by far the better alternative, as the earlier design allows the keys to be pressed rather far down, and in operation of the machine if one is not careful the keylever will be able to escape its slot in the comb and stop the machine in its tracks. Later models have an extended piece to them, allowing the keystroke action to more quickly and readily push the bar (See below, bottom). 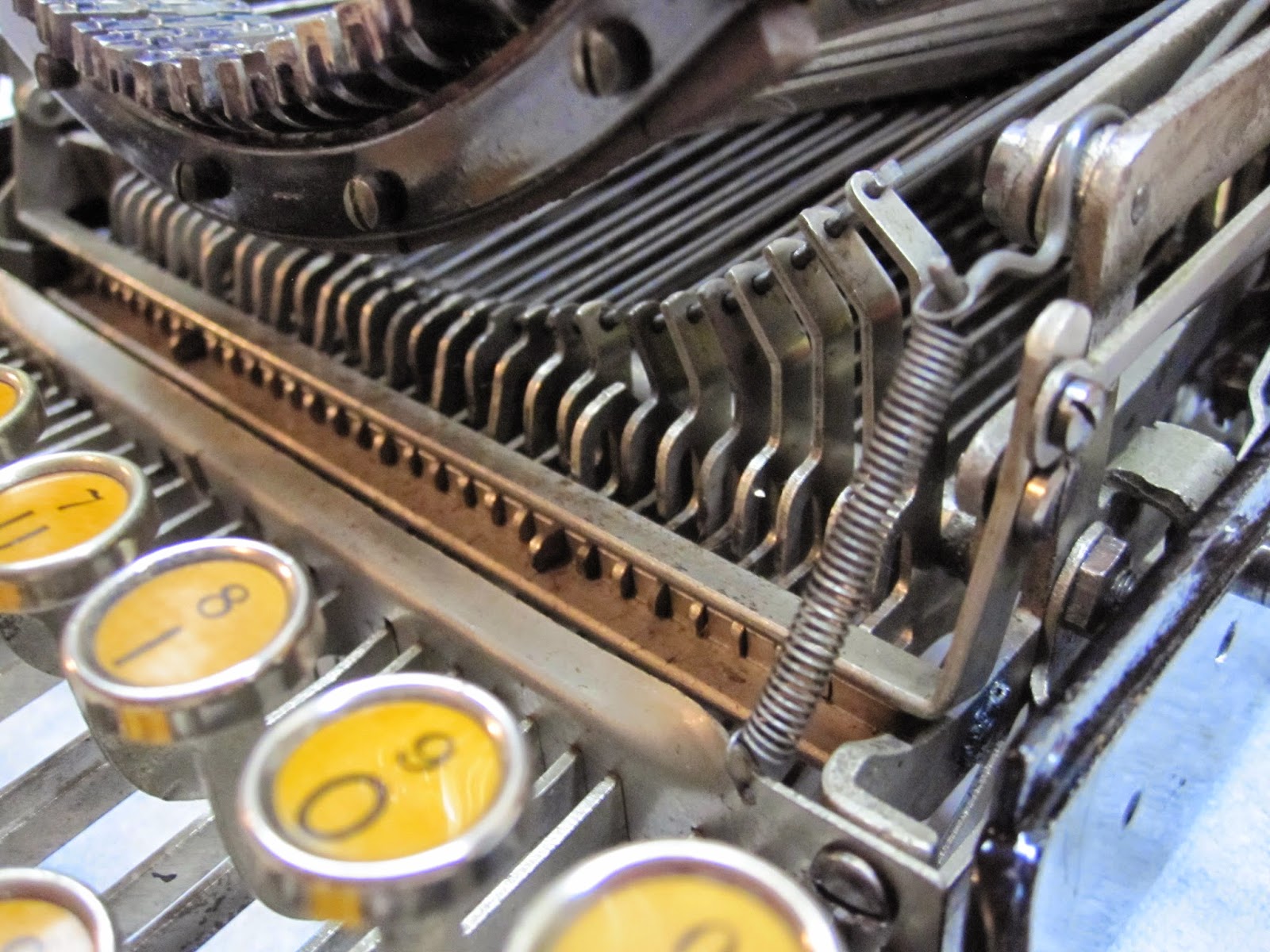 *Space bar lever*
An improvement in stability, and one I was glad to see occur, there is a change in the space bar’s lever connection. On earlier machines, the only connection point between the two levers is the space bar itself, on which they mount below it. This had the effect of allowing one side of the space bar to go down, but allow the other side to stay up. This had a negative effect on the keystroke bars function. On later models, the spacebars levers are attached together towards the back of the machine with a strong, sturdy beam welded on both sides. 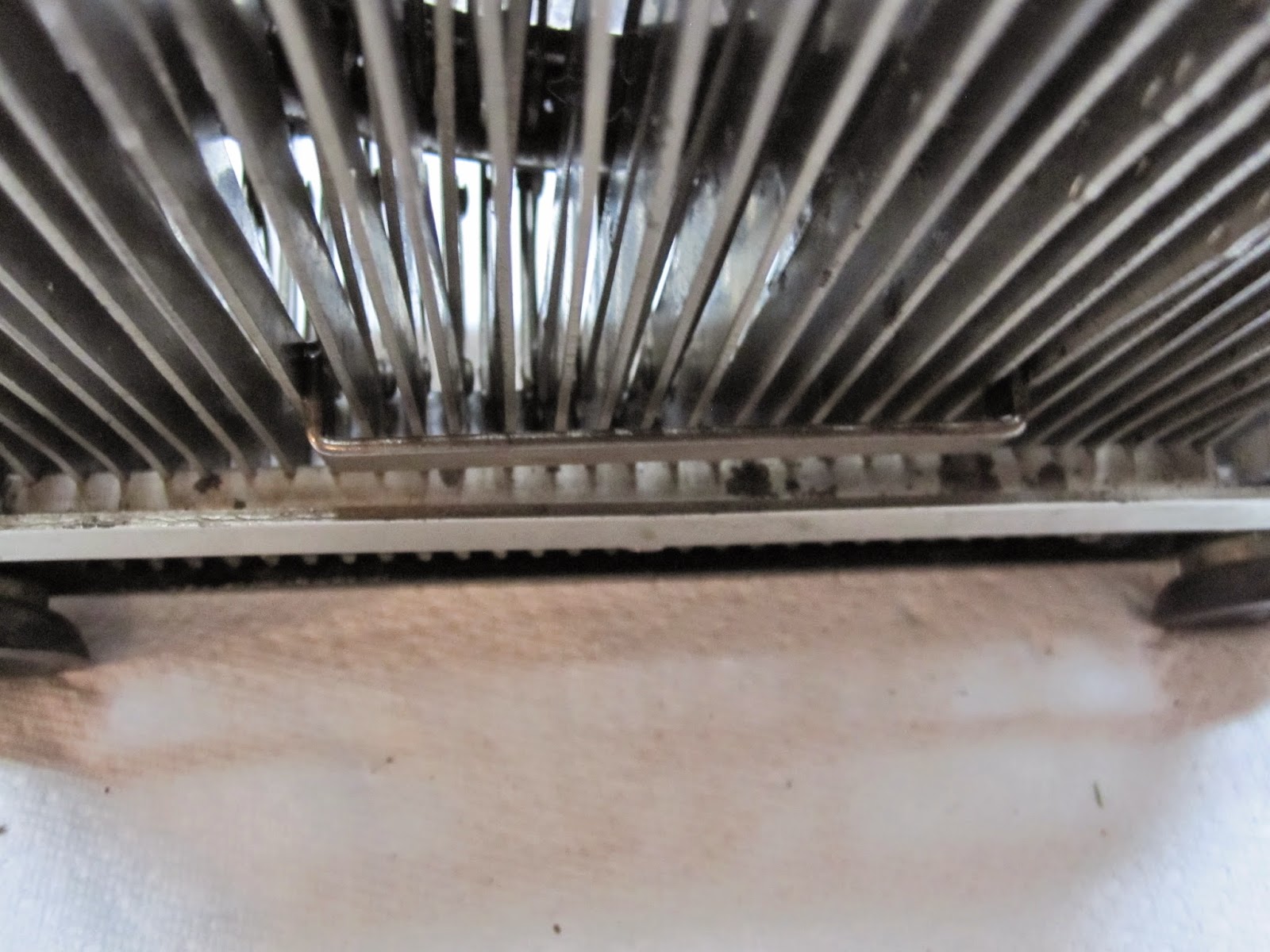 *Keystroke action piece comb*
Aside from the main keylever comb, there is a second dual sided comb of sorts just inside the main comb, which the Keystroke Action Piece© uses to maintain its accuracy position during motion. The comb-bar is the same in design from early and late models, but how it is attached is different and resulted in my inability to fully take the frame of the later machine apart. On early machines, the bar is held in place by a screw/nut combo, which allows the machinist to tune the piece and which also allows the piece to potentially fall out of adjustment (Though highly unlikely). Later models have that piece simply spot welded (or so it seems) in place, saving the company two screws and nuts per machine, and ensuring permanent alignment of the piece (and forever keeping 3 of 4 frame pieces together).

*Typebar rest*
Insignificant changes, but changes none the less. The early machines have unpainted rests, while later machines have black painted ones. Also, the method of holding the cushioning to the metal changes from splitting rivets early on, to screw/nut combos later.

*Spacebar*
Early models have a black painted piece of wood tapered off on its ends. Later models have a plastic (Or very, very smoothed off wood with a thick layer of paint) space bar with half circle ends.

*Back Frame*
The center of the top changes from a small protrusion (to accommodate the screw/nut for stopping the shift from rising too high) to a more v-shaped protrusion.


Early models have only two screws on the back to hold the rod in the segment correctly. Later models have four.

*Frame Decals*
Early models have a decal on the very front bar protecting the keys, which states the manufacturers full title and location. Later models have this decal transferred to the bottom of the front plate which shields the main body of the machine.

Ending Notes:
As one might expect, the differences between a single model and itself at a later date are relatively insignificant, as shown above. Yet small changes still occurred, and with a total production life of less than four years on the high end, its still interesting to see what changes occurred none the less. It was the companies first portable model, and they no doubt desired it to be a success.

Since, to my utter astonishment and ultimate sorrow, I do not have the luck to own a Sterling, I would ask one of you who does have such luck to, if your willing to take an exploratory look at your machines inner workings and overall design, please contact me here. Later posts will detail the differences between the No. 2's and the Sterling's, as I wish to make this series on the Fox Portables as complete as necessary.
Also of note, the No. 2 I will be using as example is about halfway through the No. 2s general production life, and so if you have an earlier or later one, I would be interested in as well asking for your services in showcasing potential changes between the No. 2s.