You know, it just so happened that back in the day, when a machine came off the assembly line, it was adjusted and tuned by specially trained individuals who were, so far as I am able to discern, paid quite well for having a fine honed skill. Yet though I  assembled this machine, I must also act as the adjuster; a task that requires far more patience than predicted.

Preparing the Underwood for use, I have sat in my garage pondering and tinkering, trying to get the machine to work as best as possible. These are the truths I discovered. May they help someone, someday.

Here you see the prey; an Underwood 5 typewriter. It lurks in the twilight between "fully functional" and "kinda functional". 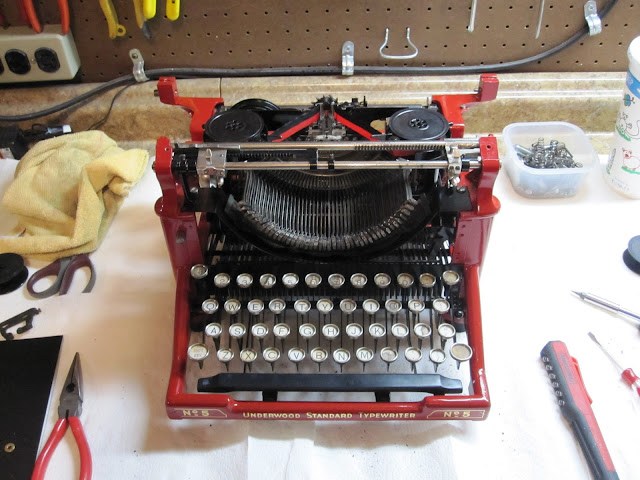 Adjustment No. 1: Bell Ringer
Do you hear the bells of liberty ringing? Wonderful. But you should be hearing an Underwood bell ringing. This little doohicky, shown below, is the right margin stop/bell ringer/typebar stop. 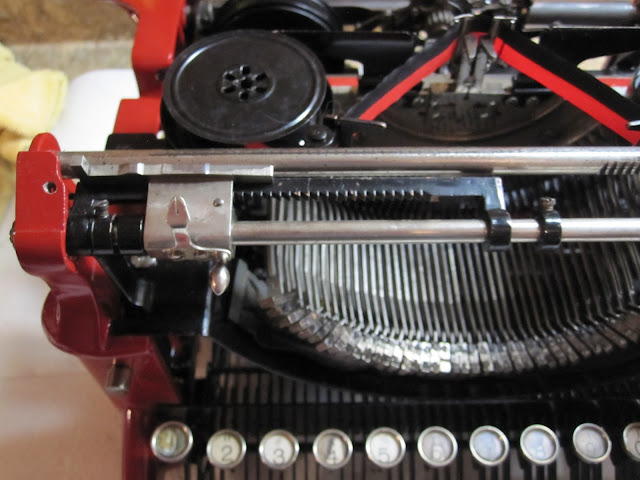 In its natural state, it should be up, and when pushed down, spring back up readily. Here inside the machine, looking to the left behind the typebar rest and to the right of the front frame, we see the end of the margin doohicky. You will notice that as the margin is depressed, this moves towards the front of the machine, pushing on the back of the actual bell ringer, and then once the right point it hit on the scale, it moves forward enough to click the typebar stop into place. 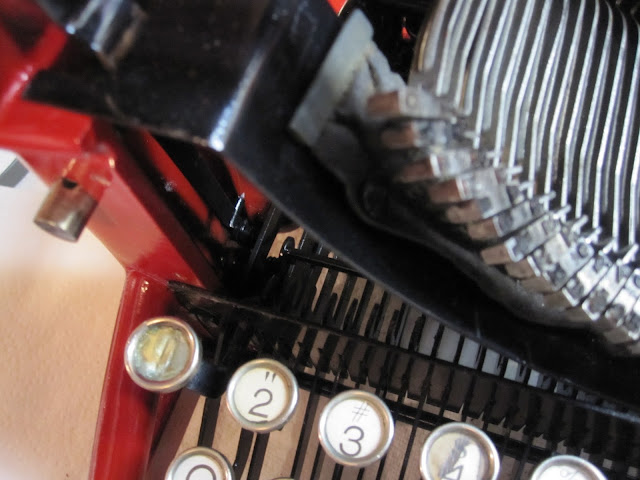 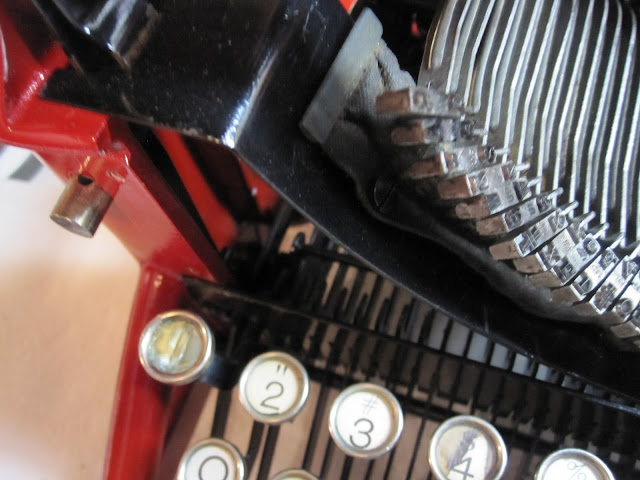 For this machine, that was working fine. The spring seemed to be strong, and the bell ringer positioned to make a beautiful ring. So what might the problem be if you think this peice is working correctly? I have an idea that what you are about to see might come as a shock and, truly, as the reason your Underwood no longer hits the bell right.

Here we see the front of the carriage. You will also note that, rather than using "The quick..." etc for checking typing, I actually use, despite it not having all the charecters of the alphabet, the opening line of The Animals hit song, "House of the Rising Sun". Why do I do this? Even I don't know. Anyway, on to the matter at hand. 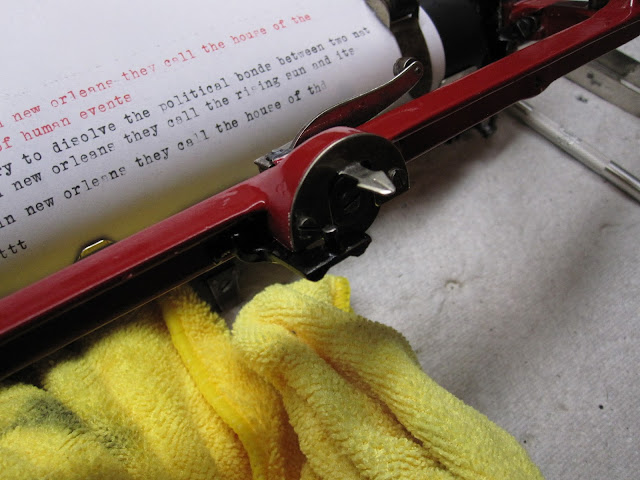 Flip that sucker over, and behold... part A14. I'm out of creative names. This part ensures that the carriage scale indicator matches up to the actual scale, and, more importantly, runs along and causes the margin stop doohicky to depress. This is the only other real part that belongs to the bell ringing system, but how could this be affecting it? I mean its a solid, straight piece of steel.... 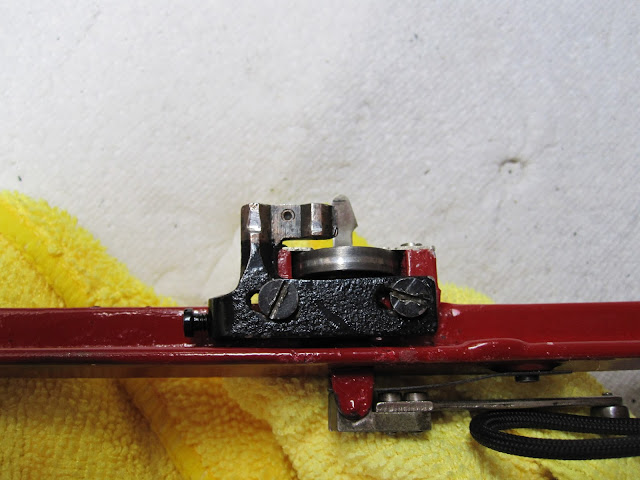 HOLY JUMPIN' JACKRABBITS! You may find that, due to the age of your machine and the relentless typing it has undoubtedly produced in its lifetime, that american steel has actually worn down! As you can see, the part has been cut by the margin piece over time, and I was able to see that it conforms perfectly to the edges of the part. To test if this is the real cause, I threw washers under the part Al4 to lower it a bit, and sure enough it made the bell ding happily. It also, however, threw the typebar stop prematurely. I either need to find slightly thinner washers, or get a non-worn part Al4. Regardless, this may be your problem. Check for yourself! 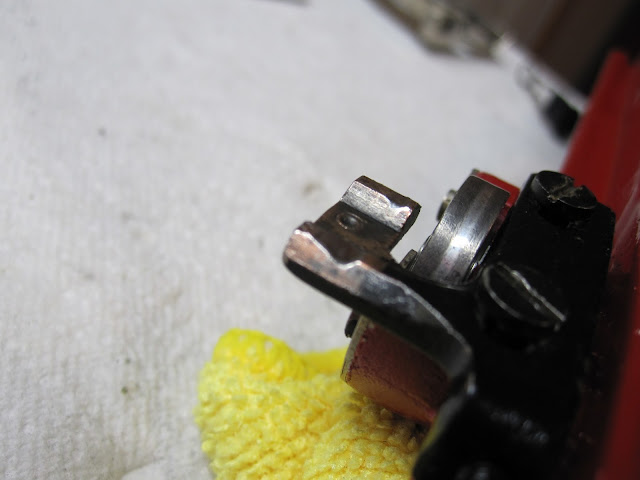 Do not make the mistake I did. I foolishly, in my reassembly, unscrewed a small escapement action screw. Turns out, youll want to keep that screw in factory position so that all other parts can be brought into adjustment by aligning it to the action of this one tiny screw (shown farther below.)
Here is the escapement in action: 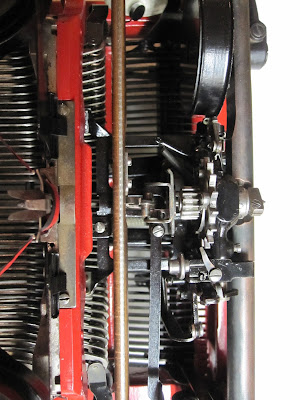 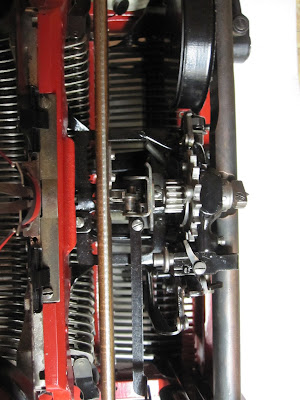 Wow wasnt that exciting? If you cant see it, the bar to the right of the bright red (the universal lever, activated by the typebar itself rather than the keylevers) moved to the right (backwards), which trips the escapement.


This small screw (locate just above the pointer) is the escapement screw. It adjusts when the universal bar actually hits the escapement. An Underwood is a simpler machine, but in being so, any small issue can cause big problems. I had set the screw to far in, so that the typebars were getting way to much resistance just at the typeguide. The result? half faded letters, some not even making it to the platen at all. Adjust this screw ever so slowly, so that in the end the typebar can reach its full stopping point without any extra effort upon the key, while still tripping the escapement before fully coming to its stop. 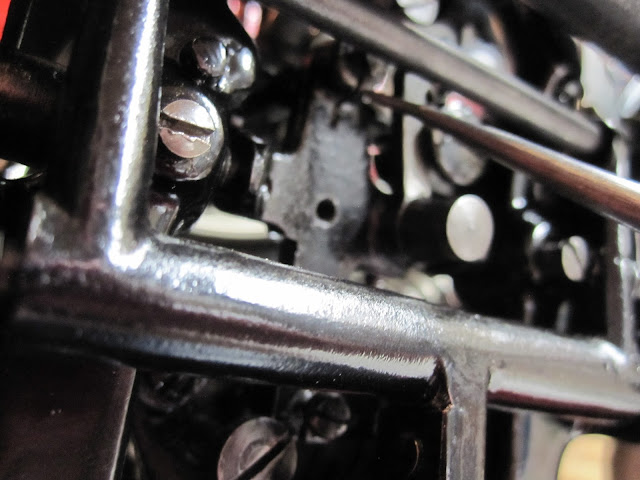 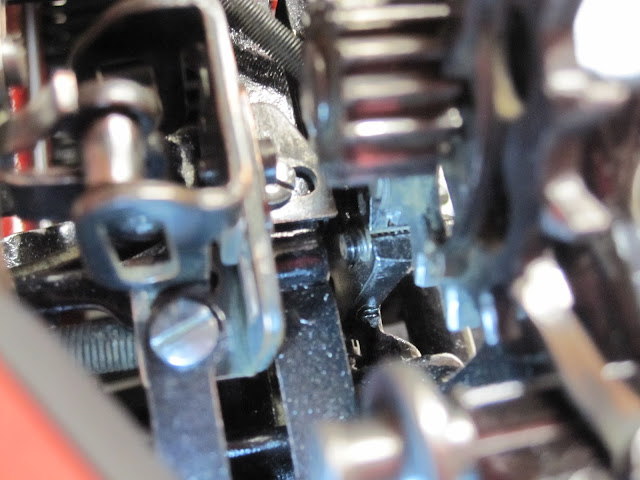 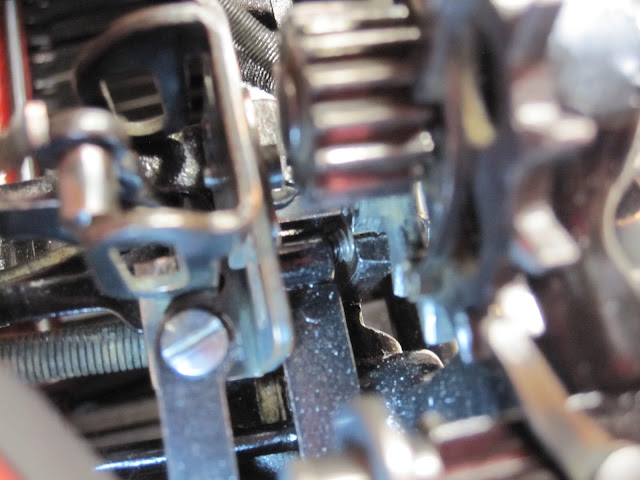 Adjustment 3: In relation to the escapement trip, we now have to mess with the spacebar (which for me stopped tripping the escapement entirely after the previous adjustment). 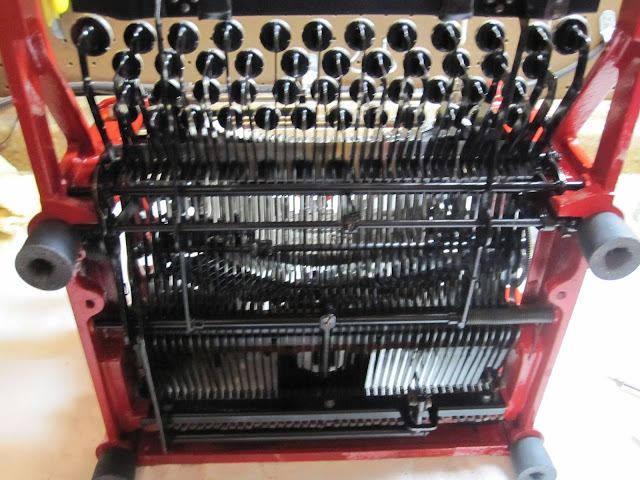 This here is the screw to loosen, then move the bar so that it just barely does not connect to the action point (If need be it can touch, but it may produce a slight squeak). 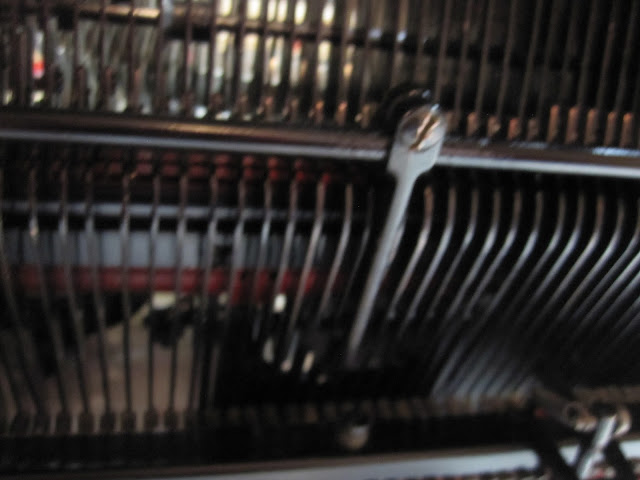 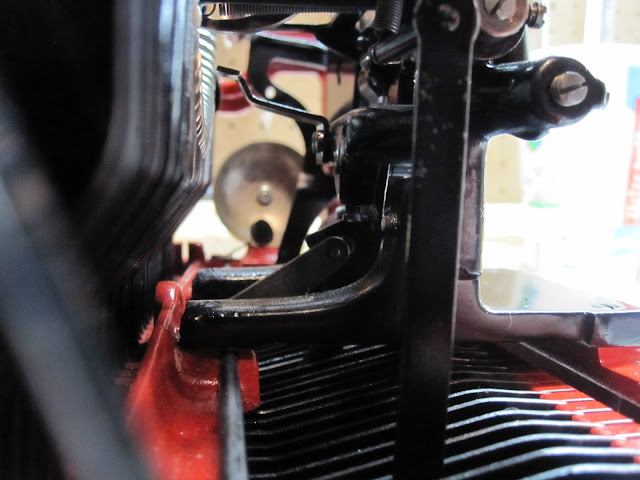 Make sure that the part shown just above the bottom most black bar is allowing the left shift key to cause the shift bar rod end to swivel in this part from point to point. The bar rod end has a small jut to catch within the opening. 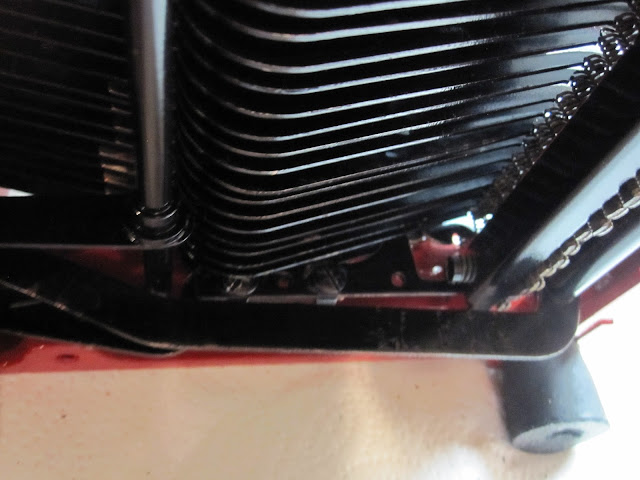 You can adjust the carriage shift tension with this spring, or... 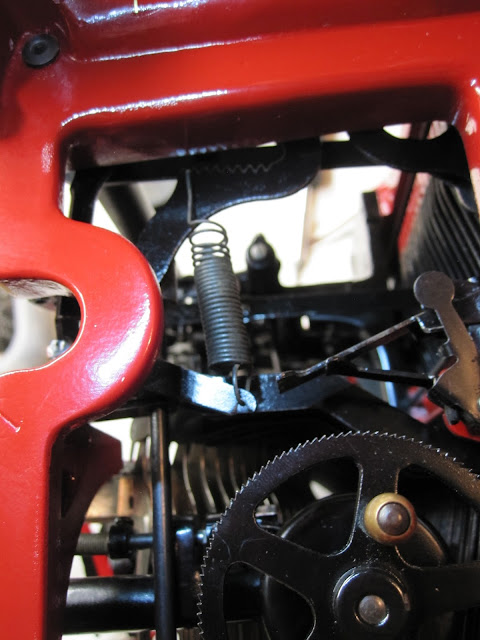 IF something has already messed with its adjustment, this super spring on the carriage itself. 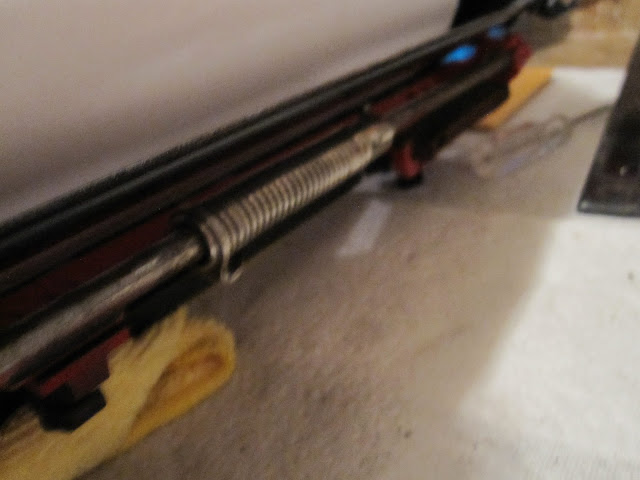 I found, oddly enough, that the keylever comb was actually causing the shift rod to stay too high. By lifting the comb up, the shift keys could then rise up a bit more as well, resulting in a lower bar. 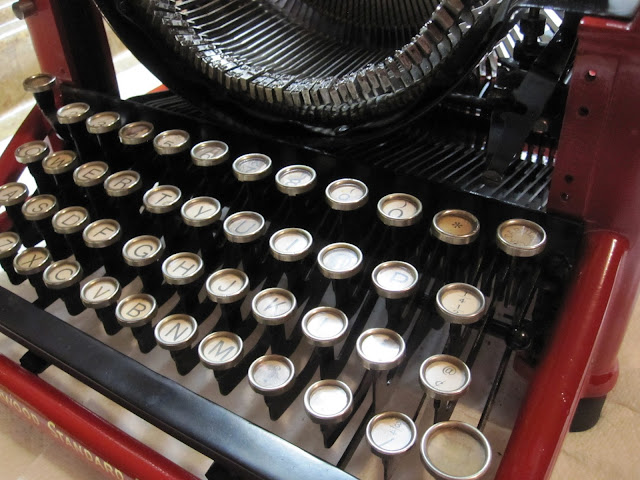 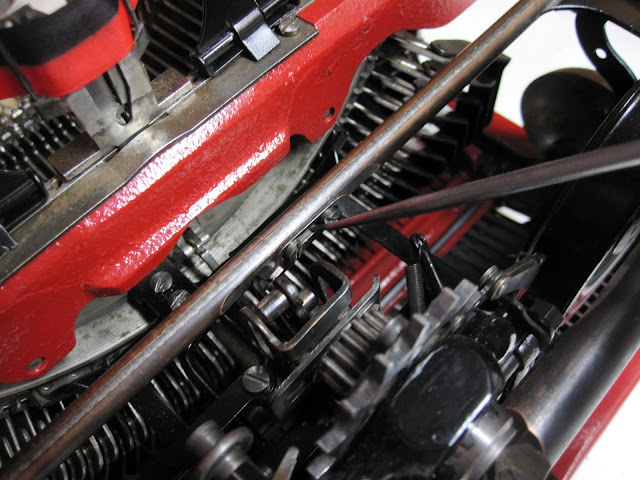 This concludes the first portion of how to tune an Underwood. I'm unsure of what else there will be to show you, but by golly if I find out anything else I will do just that.

If a Black Fox were to be repainted or plated, what would it want to be?
-Dark Red
-Black
-Nickel (plated)
-Gold (plated)
- Dark Blue
-Light Blue
-Green
-Other (describe in comments)

I'm not sure yet as to whether I will mess with the paint on the Fox, but I have the notion that it's a machine (due to the special keys) I would like to make pristine and pretty for use in an office setting if I so desire, and to keep for quite some time. I was also so impressed by the decals from the typewriter decal shop, that I feel I could do it justice.
Let me know what you think.
Posted by Words are Winged at 9:08 PM