When it comes to my most wanted machines, it truly is hard to properly make out a list (though I did try a few weeks ago). There are just so many awesome and cool designs out there. But of those designs that actually worked, there were two that stood out prominently that I hoped to own: A Blickensderfer, and a Hammond.

Due to sheer dumb luck, I now own a Blickensderfer. And on top of being a Blickensderfer, its a model 9. According to Mr. Richard Polt (Via the Classic Typewriter Page), there is an estimate that only roughly 9,000 of these guys were made, so I'm proud to own one. 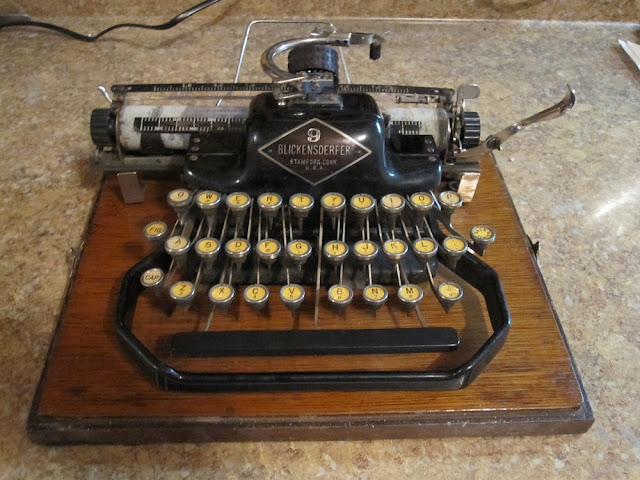 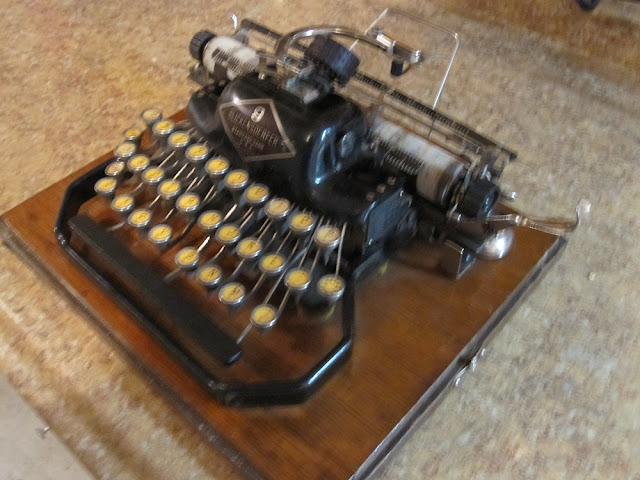 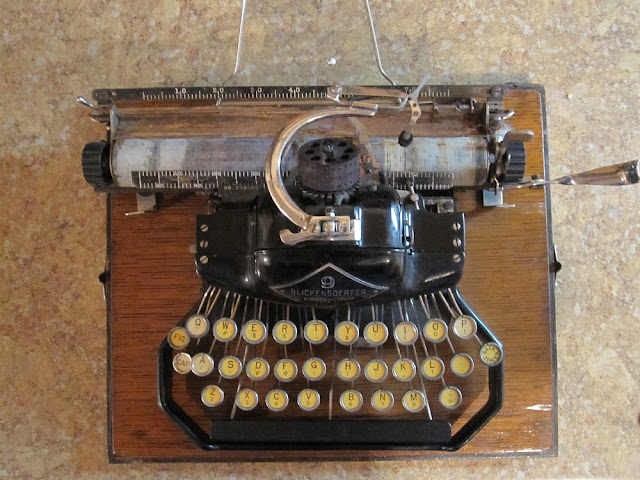 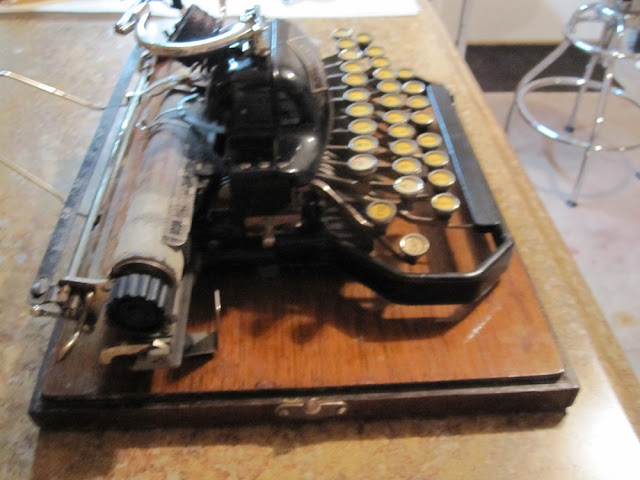 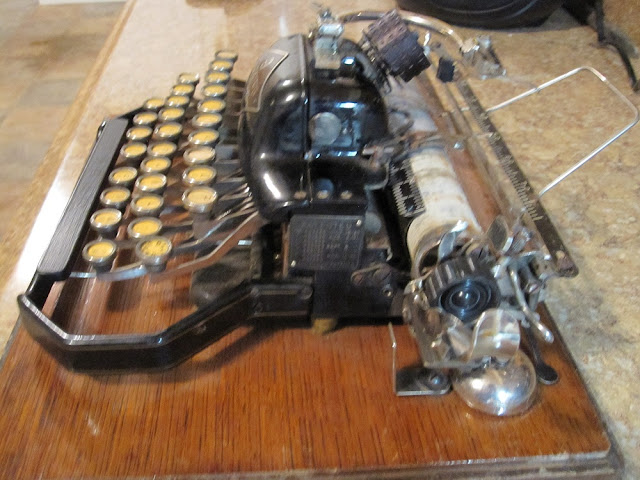 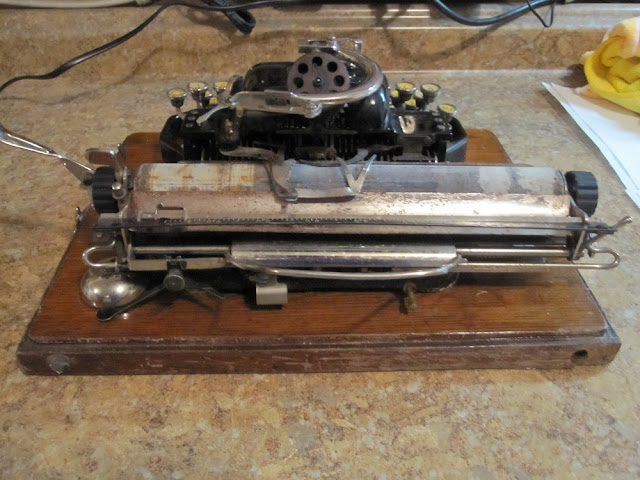 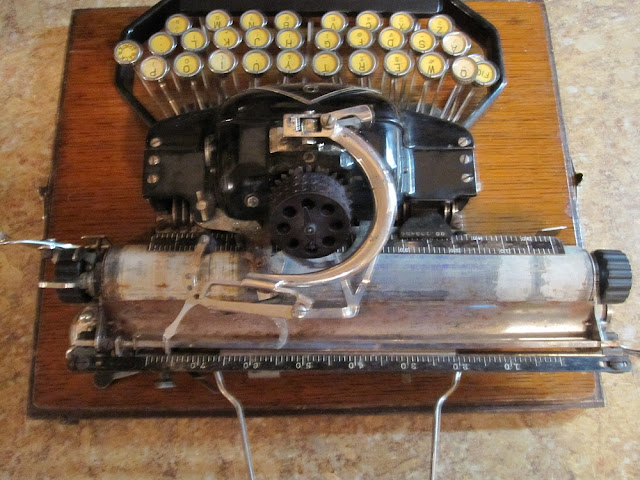 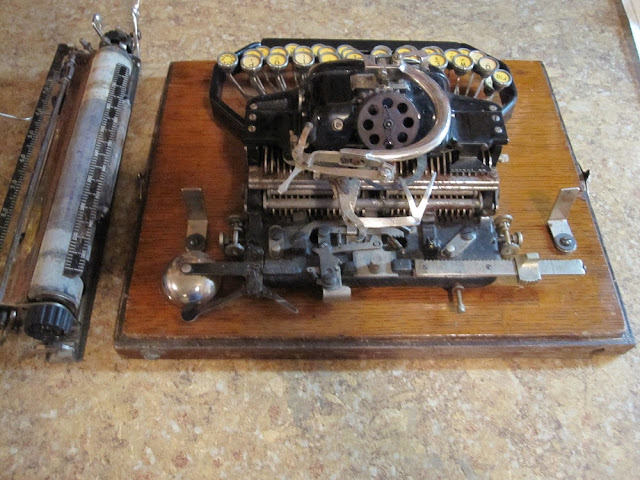 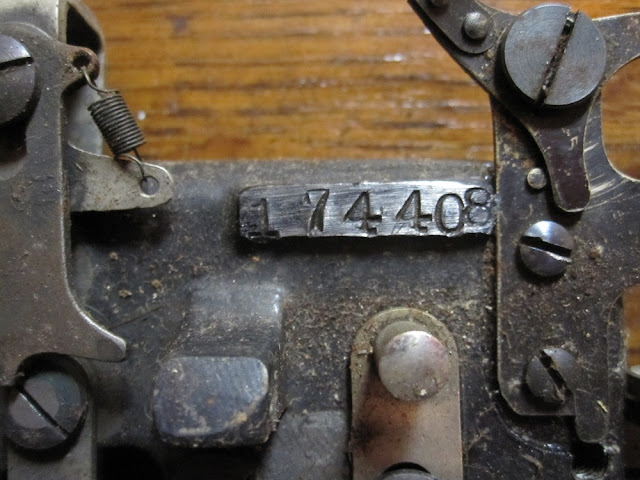 Oh how very proud am I,
to own this Blick 9.

Honestly, the only machine safe from me would be a Sholes and Glidden.

So here you are! A random glimpse into my dissassembly of the Blickensderfer Model 9! I don't ussually document my deconstruction process, but I figured I might as well for once let someone see what I do. It took about 30 minutes to get it all apart (without taking the main head apart yet, of course. Its still frozen up, so that WILL happen, once I get the body cleaned up.)

The first 6 or so are reference pictures for re-assembly. 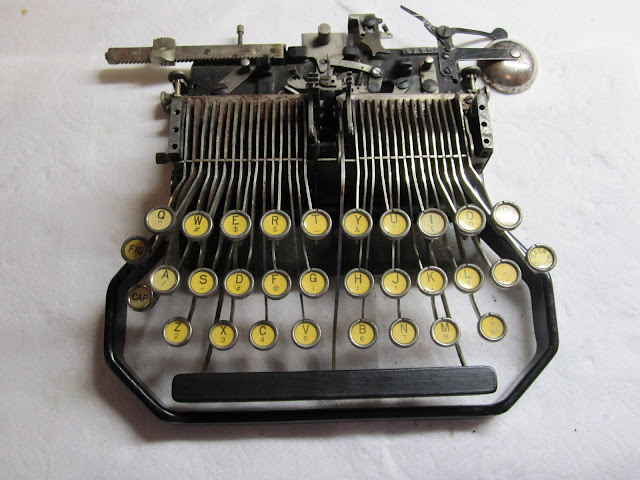 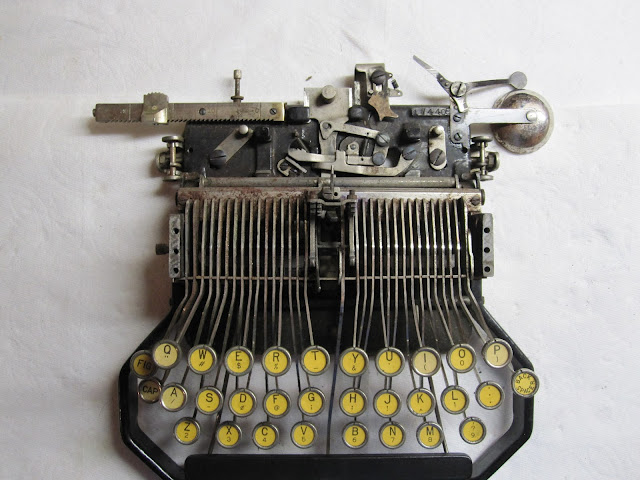 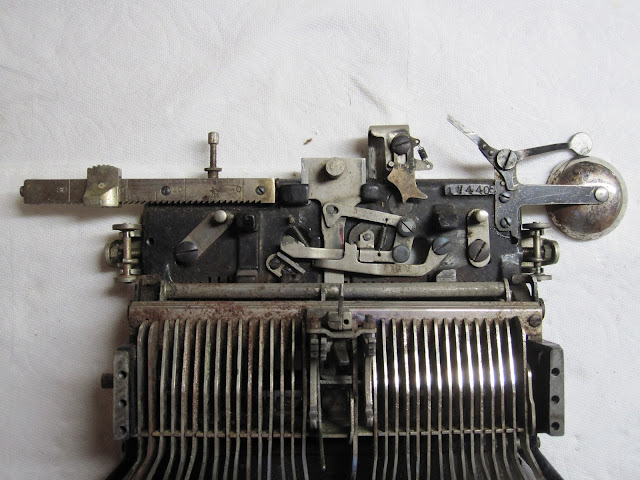 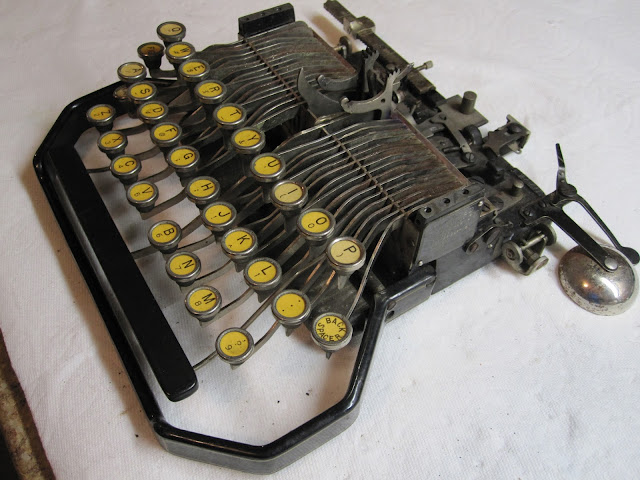 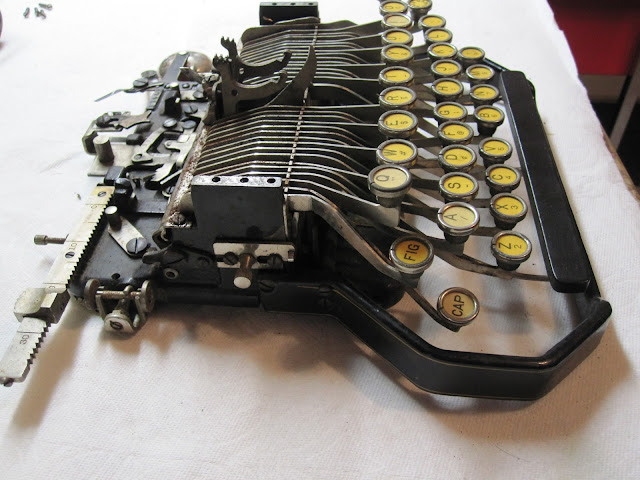 As a note, I would like to mention that it seems you can never predict what the hell will happen to the rubber feet on typewriters. Look at this! The front, though white, are still in their normal shape where the back have turned into diseased pancakes! What the heck! 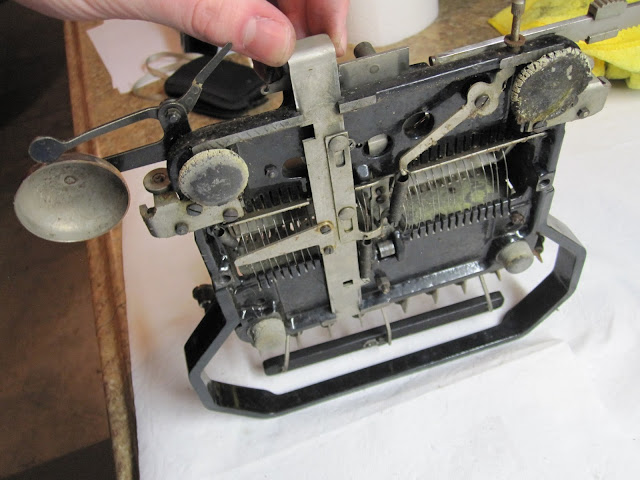 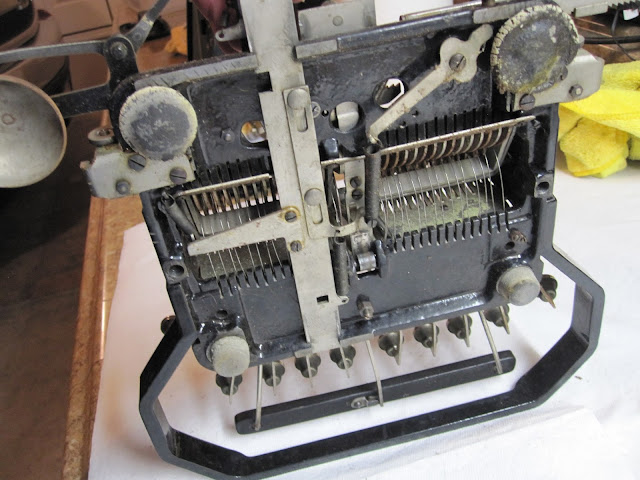 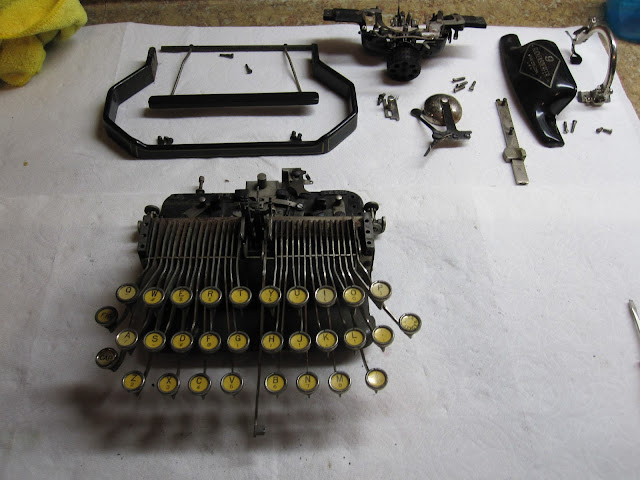 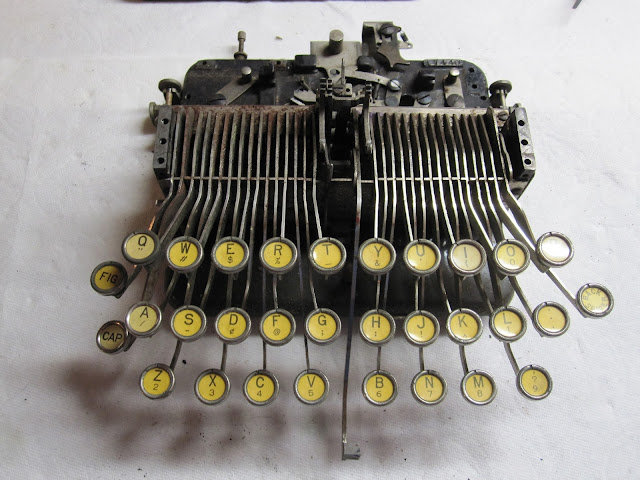 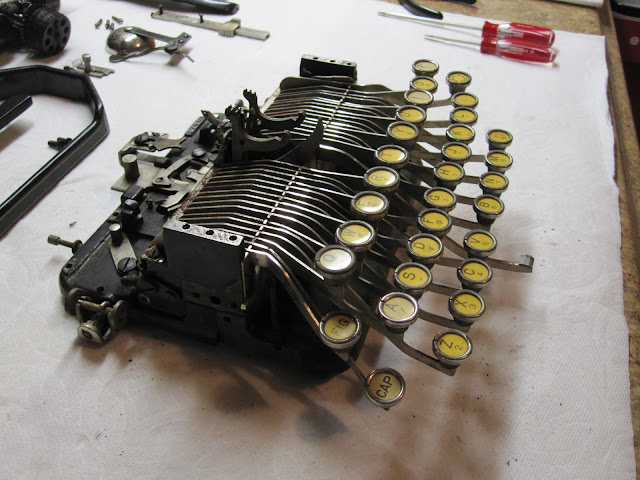 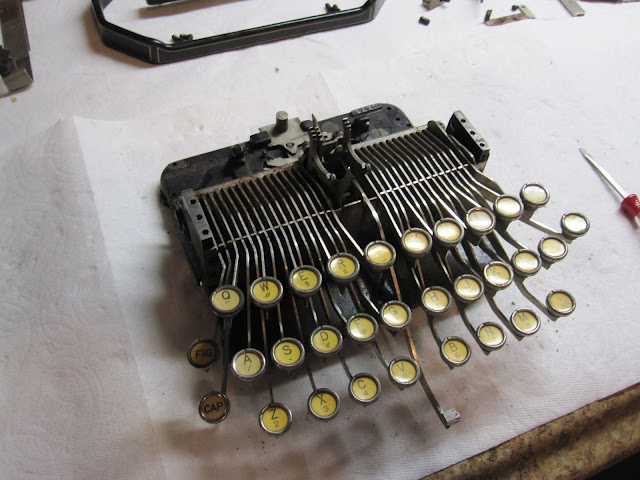 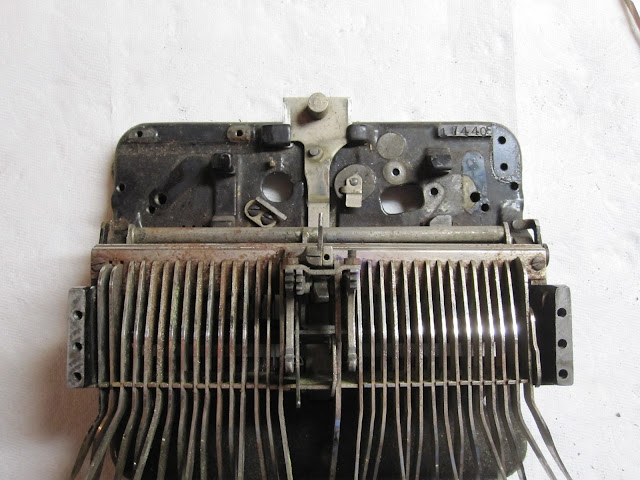 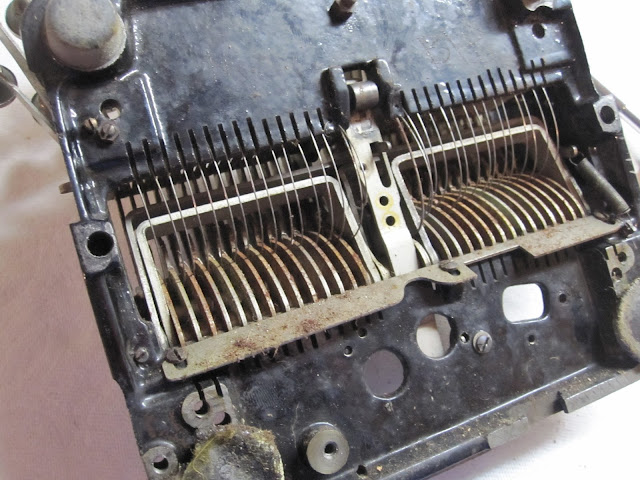 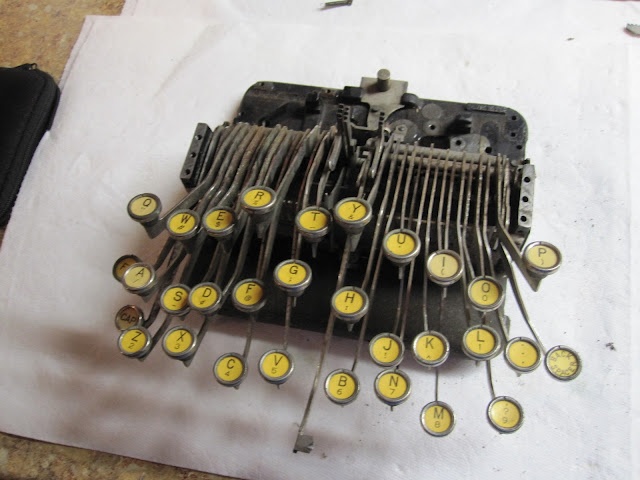 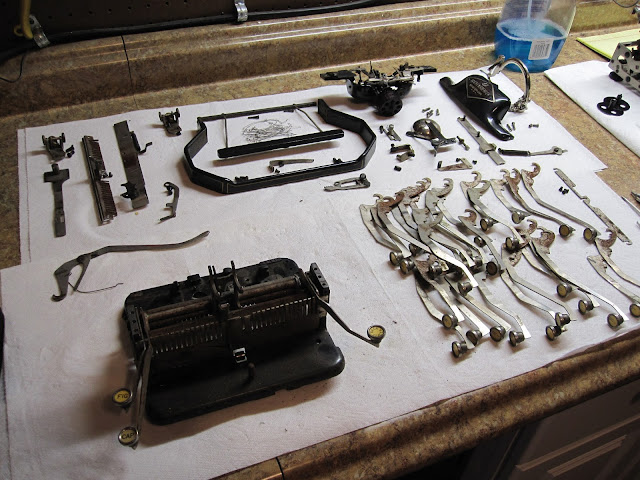 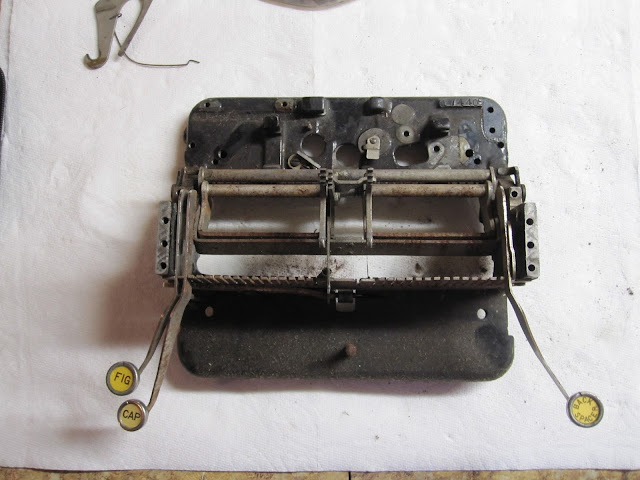 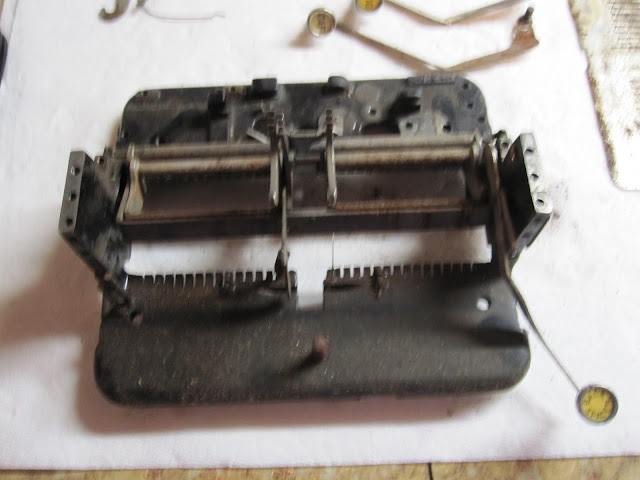 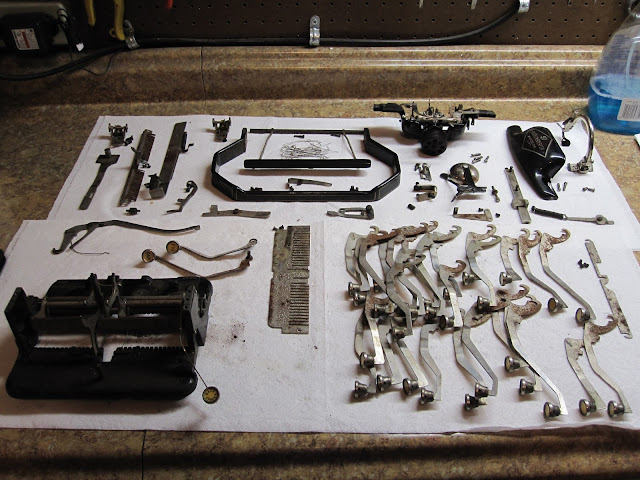 And thus, the Blickensderfer 9 has been torn asunder. The paints in amazing shape, and most of the exposed nickel is going to clean up nicely (some of it like the type-bar guide is all corroded to hell, though).

I already did a How To on the Rem-Blick which is 99% identical, so I probably wont do another series for this one. Unless you guys want one specifically just for the sake of it.

As a final note, I would like to mention once more just how ingenious this machine is. Its so small, so well designed, yet so easy to comprehend. I believe that the Blick-Electric would have revolutionized the world of typewriters had it only caught on, and we would have seen 80 extra years of progression in regards to electric utility machines.

I really want to see someone with a Postal show it off, and compare it to a Blick. Does the addition of a motor make it easier to use? Does the ribbon get in the way compared to an ink roller? What is the difference in the actual design for the typewheel mechanism?
Posted by Words are Winged at 3:03 PM