These are the voyages of the Blickensderfer 9

I hereby swear, by the typewriter engineers of old, to never again take a Blickensderfer apart.

For such a simple machine, it sure fought back. In the end, I suppose I made things *sort of* better. At first the mechanism would not move at all, would not shift, and the carriage was half-way to being frozen in place. Now, it can type. Not perfectly, but certainly well enough for a letter to a friend.

In what I can only describe as a nightmare to deal with, I foolishly messed with the tuning screws on the machine (of which there are 4 directly related to the ability of the typewheel mechanism to function). As far as I am now aware, you DO need the proper factory manuals to deal with tuning these screws else everything will jam up.

Though it shames me to admit it, when I was trying to pry the typewheel off I had also inadvertently broken a small, teeny bit of steel on the central piece of the mechanism. In doing so, I rendered the part un-usable. To fix this issue, I had to sacrifice my currently carriage-less Rem-Blicks own central piece as a substitute. They only made around 9k 9's, and only around 6k Rems, so either way I am most assuredly going to deal with typewriter hell at some point or another for damaging anything related to either of them.

Sadness out of the way, here is the Blickensderfer 9 in all its glory. 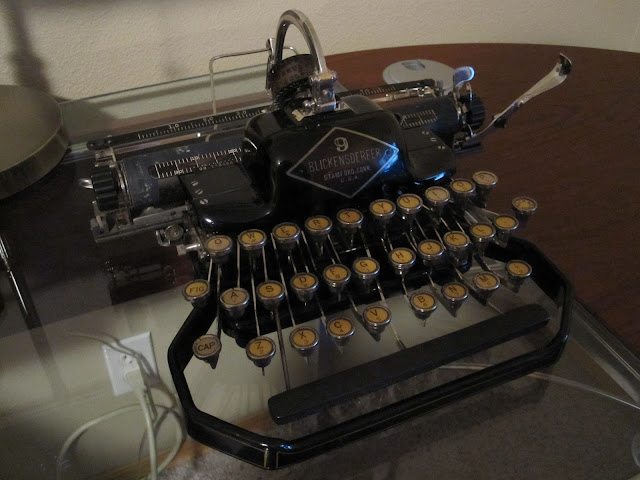 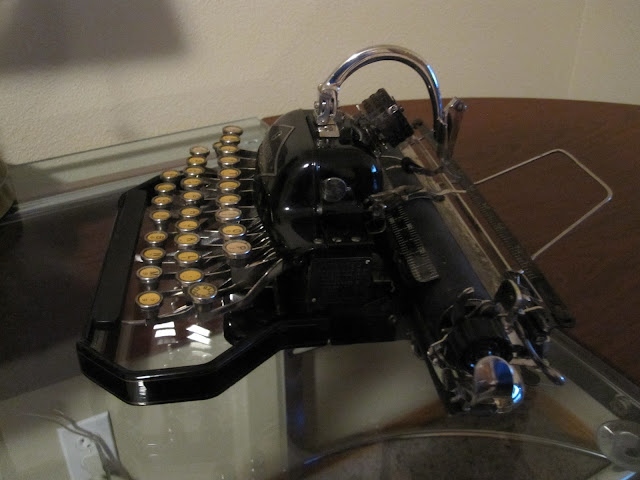 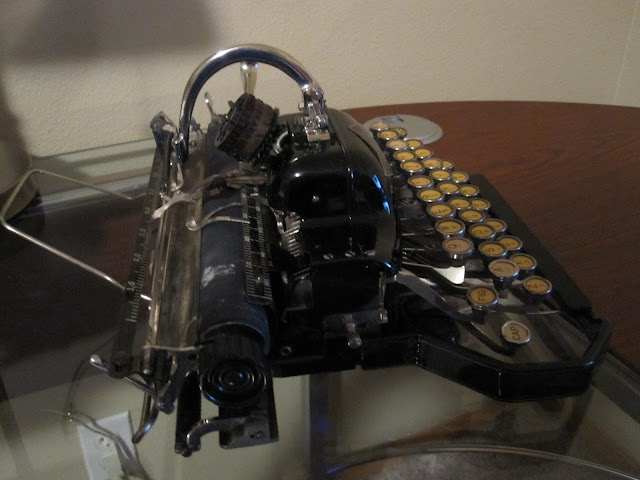 There are still a few small things to tune. I had forgotten to reset the spacing screw before typing, so as I fiddled with it I ended up with some odd line spacing. Alongside such, my O's sometime turn into I's, and the typewheel doesn't always pick up the ink as well as one would hope. 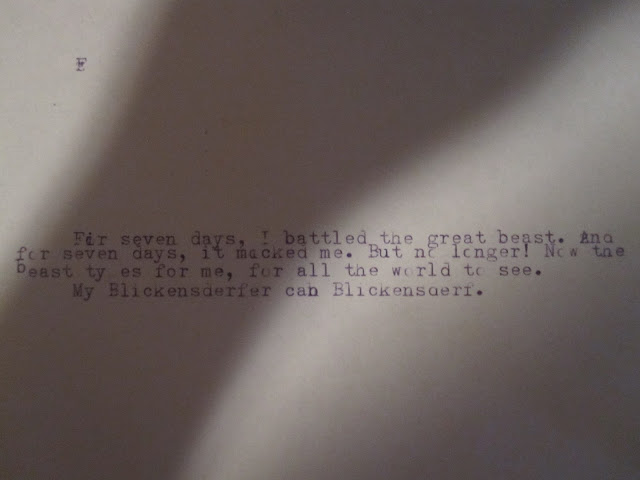 I ended up needing to rebuild the typewheel mechanism, and not just once but about 3 separate times to get the bleedin' anchor-gears into their proper spots. In regards to design, its quite simple. But in being simple, its beyond complex to get correct. I highly recommend never taking one apart.

One of the most disconcerting fixes I had to make was the need to bend the main ink arm. Somewhere along its travels, I believe someone had smashed it in a wee bit, because it was too "scrunched up" to allow the typewheel to shift at all. I grabbed a small toaster oven and got it hot, then carefully bent it with some wrenches, and all was well.

The case is in great shape (though still in need of a good cleaning), and I do believe that once its properly brought up to snuff, I may very well begin taking this lil' blick with me to type on. It's still not the quietest of machines, but by golly it definitely is unique.

And finally, if anyone has a parts Blickensderfer 5 that's beyond saving for one reason or another, let me know. I'm hoping a 5's mechanism will work with my Rem.
Posted by Words are Winged at 9:16 PM